Brooklinen is a producer of some very fine linens and bedding. I have personally reviewed a few of their items, so I was excited to try out their down comforter.

The Brooklinen comes in two models: Lightweight and All-Season, and I received the All-Season Down Comforter, which is designed to be fluffier and warmer than the Lightweight model.

Brooklinen is known for their luxurious bedding so, to find out if this is true luxury, read on for my full Brooklyn Down Comforter review.

The Brooklinen Down Comforter is a great luxury pick for hot sleepers. Click the button for 10% off Brooklinen. 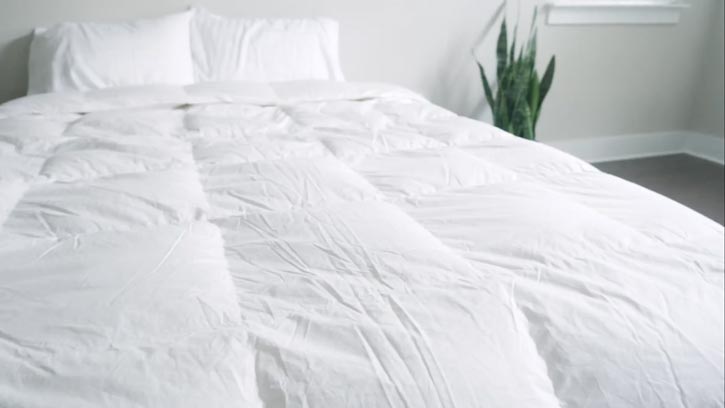 The Brooklinen Down Comforter is a great luxury pick for hot sleepers. Click the button for 10% off Brooklinen.

The Brooklinen’s sateen shell is very soft and smooth and, running my hand top of the comforter, it is very smooth. Lying underneath the comforter, I can say that it feels nice against my skin, so I did not need to place the Brooklinen in a duvet cover.

However, I was surprised by the Brooklinen’s lack of loft. Considering it contains down clusters with a 700 fill power, I thought it would be much fluffier. I believe this might have to do with the fill weight, not the fill power. Fill weight refers to how much fill one is actually getting in a comforter. The down can have a very high fill power but, if there isn’t much of it, it won’t be a very fluffy comforter.

The All-Season Down Comforter is very breathable because the cotton shell and down clusters allow for quite a bit of air to flow through the comforter. Pairing the Brooklinen with some lighter sheets, I am not sleeping hot or waking up sweaty and clammy. The Lightweight model is even airier than the All-Season so I can imagine it sleeps even cooler!

However, when I set my thermostat to make my room even colder, the Brooklinen was not insulating me enough, and I had to pair it with another blanket. The Brooklinen could work as a duvet insert for a flannel duvet, which might provide more warmth during the colder months.

People who are worried about making a mess should invest in a duvet cover because this will protect the Brooklinen, and a duvet cover is much easier to clean than a comforter!

All in all, the Brooklinen All-Season Down Comforter is a great luxury option for hot sleepers. I personally enjoyed my experience with the Brooklinen, but those who need a comforter for the colder months should look elsewhere.

The Brooklinen comes with free shipping and a Lifetime Warranty. Brooklinen also offers a number of items like sheets and duvet covers.