Have you ever found it difficult to sleep when you’re feeling angry, sad, or stressed out? And when you get up in the morning with a poor night’s sleep do those feelings just get worse? If you answered yes, then you already know about the connection between sleep and mental health.

How Does Sleep Affect Mental Health?

Sleep affects mental health in a number of ways. The body, and particularly the brain, needs sleep to function properly. Vital cognitive processes, like memory consolidation and neural communication, occur during sleep. Without proper sleep, our brains cannot function normally during the day.

When we don’t get enough sleep, it makes it harder to remember information, regulate our emotions, concentrate, and focus. Long term, sleep deprivation leads to increased risk for mental health disorders like anxiety and depression. Research has found that 50% to 80% of psychiatric patients suffer from chronic sleep problems, as opposed to just 10% to 18% of adults in the general population.

Though much more research is needed to fully understand the complex relationship between sleep and mental health, it is clear that the two are closely connected. Evidence of this close relationship is clear in the way sleep affects numerous common mental health conditions.

There is a wide range of mental health conditions that are negatively impacted by improper sleep. Take a look below at some of the most common disorders and how sleep affects them. 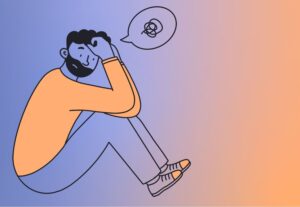 Depression is one of the most common mental health disorders, affecting more than 17 million adults in the United States. Depression is a mood disorder that affects emotions and mood. For many, it leads to a continual feeling of sadness that doesn’t resolve. There are a number of different types of depression, including postpartum depression (occurs after giving birth), persistent depressive disorder (PPD), and seasonal affective disorder (SAD).

There is no single cause of depression. However, there are a number of factors that can lead to it, including prolonged stress and hormonal changes. These factors also interfere with sleep, which has a bidirectional relationship to depression. Studies show that those who are depressed are more likely to suffer from insomnia. Conversely, those with sleep problems or disrupted sleep are more likely to have depression. Though getting proper sleep won’t cure depression, when coupled with a healthier lifestyle, it can greatly improve symptoms. 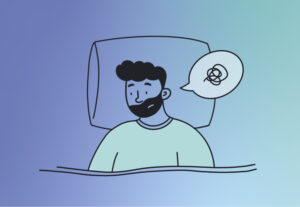 Anxiety and sleep are closely connected, and when one suffers, the other does as well. This creates a vicious cycle, in which individuals will be prevented from sleeping due to feelings of anxiety, and their anxiety will worsen due to lack of sleep. In addition, experts have found that anxiety disorders are often linked with insomnia. Some forms of anxiety will require medication to help sufferers sleep better, but certain lifestyle changes can help ease symptoms. Going to bed at the same time each night, not using your phone in bed, and avoiding alcohol and caffeine before bed all contribute to a better night’s sleep and reduced feelings of anxiety.

Grief will be experienced by most people in their lifetime. Grief can arise from a number of situations, including death of a loved one, divorce, job loss, miscarriage, health problems, loss of a home, and more. Grief can lead to both physical and mental symptoms, including intense sadness, inability to focus on anything other than the loss, numbness, suicidal thoughts, weight loss, body aches, and many more.

Grief can have a mild or severe impact on sleep health. Research found that the more intense the grief, the more likely the person will suffer sleep loss. The Mayo Clinic refers to complicated grief as grief that is persistent and interferes with a person’s ability to go on with their life. One study found that complicated grief was associated with lower sleep duration and lower sleep quality. Though grief has to run its course, some ways to sleep better while grieving include taking time to emotionally process during the day, keeping a sleep journal, meditating, and seeking social support.

Loneliness is a normal human emotion, and is experienced by most people at some point or points in their lifetimes. However, when loneliness is persistent and feelings continue to get worse, it’s referred to as chronic loneliness. Telltale signs of loneliness include isolating oneself, social anxiety, extensive time on social media, body aches, confusion/memory problems, and tiredness.

Not only does loneliness tend to make sufferers feel tired, but it’s also associated with lower sleep efficiency. Additionally, as humans are social creatures, loneliness can increase levels of the stress hormone cortisol, which can make it harder to sleep. Loneliness is also associated with weight gain and increased risk for drug abuse, which both worsen sleep quality. According to experts, the best way to combat loneliness is to reach out to others, whether they be family, friends, or a support group. 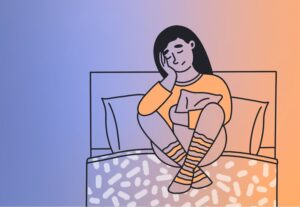 Seasonal affective disorder (SAD) is a type of depression that is linked to the change in seasons. It’s relatively common, with about 10 million US adults experiencing it each year. The effects of SAD usually take place at the end of autumn or beginning of winter, when the days begin to get shorter. SAD sufferers often experience a dip in their energy levels and an overall worsening of their mood. People with SAD report feeling depressed, lethargic, and unmotivated during the winter months.

Though depression itself is linked to worse sleep quality, those with SAD have some added detriments. SAD is linked to the amount of sunlight a person gets, and sunlight is what signals to the body when it’s time to be awake and asleep. Those with SAD are more affected by sunlight changes, and struggle to sleep properly with low sunlight levels. There are a number of ways that SAD is treated, including sunlight therapy lamps, behavioral therapy, and medication.

Post-traumatic stress disorder (PTSD) is a mental health condition that arises from a severely distressing experience. It can occur from a number of different terrifying events, and can affect both those who witness and are affected by it. Common symptoms of PTSD include flashbacks, nightmares, and inability to complete daily tasks. Avoidance of place and people that trigger memories of the event, changes in mood, and increased levels of fear and uneasiness are other common symptoms, according to the Mayo Clinic.

PTSD often has a negative effect on sleep. According to the National Center for PTSD, between 71% and 96% of people with PTSD experience nightmares related to their trauma. Trouble falling and staying asleep is also common in PTSD sufferers. Lastly, those with PTSD are more likely to use drugs and alcohol to cope, and these substances also negatively impact sleep. For many, therapy is needed to help ease symptoms of PTSD and get their sleep back on track.

Attention deficit hyperactivity disorder (ADHD) is one of the most common neurodevelopmental disorders in children, according to the Centers for Disease Control (CDC). Symptoms in children include difficulty controlling impulses, trouble paying attention, and inability to sit still. Though it is less common, ADHD is also seen in adults, and may present itself as feelings of restlessness, difficulty performing at work, and strained social relationships.

Children with ADHD have a higher risk for developing insomnia and other sleep disorders. Experts believe that these children struggle to sleep as their minds remain overly active, even throughout the night. Unfortunately, when these children who don’t get proper sleep, their ADHD symptoms worsen. Parents of children with ADHD should take their children to see a pediatrician, who may prescribe medication, therapy, and/or lifestyle changes.

Obsessive compulsive disorder (OCD) used to be classified as an anxiety disorder, but is now considered its own disorder. It affects about 2 million people in the United States each year. According to the Cleveland Clinic, people with OCD “have recurring and distressing thoughts, fears or images (called obsessions) that they cannot control. The anxiety these thoughts produce leads to an urgent need to perform certain rituals or routines (called compulsions).” Though the symptoms of OCD range from person to person, common obsessions include fear of germs, fear of a family member dying or being hurt, fear of social situations, and fear of disorder and/or asymmetry.

Those with OCD perform “rituals” to combat their fears. These rituals include handwashing, counting, checking things, eating foods in a specific order, repeating words or phrases, collecting or hoarding items, and more. Sufferers can struggle to get to sleep if they haven’t completed their rituals, or may feel an urge to get up in the night to do a ritual. One study found that people with OCD had worse sleep quality than the general population. Common treatments for OCD include cognitive behavioral therapy (CBT), medication, and outpatient programs.

Schizophrenia is a severe mental health condition in which individuals do not perceive reality normally. It is a somewhat rare disorder, affecting just 1% of people worldwide. Those with the condition often suffer from hallucinations, delusions, and disordered thought patterns. Individuals with schizophrenia often require lifelong treatment that may include medication, living with a guardian or carer, and regular therapy. Symptoms of schizophrenia typically present in men during their early 20s and in women in their late 20s.

How to Improve Both Sleep and Mental Health

Therapy is a common treatment for sleep disorders and mental health problems. Cognitive behavioral therapy (CBT), in particular, has shown to help patients with disorders like insomnia, OCD, anxiety, PTSD, to name a few. CBT is a type of therapy that focuses on changing your behavior and patterns. In terms of your sleep, CBT can help you establish a healthier sleep and improve racing thoughts that prevent sleep.

CBT is the most common form of therapy when it comes to treating sleep disorders. In general, CBT is broken into three phases: identifying the fear or anxiety, challenging it, and replacing negative thought patterns and behaviors with positive ones. One example of cognitive behavioral therapy is establishing a consistent sleep schedule and sticking to it each night. 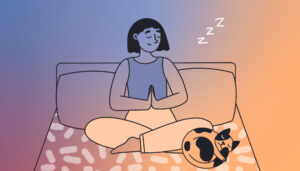 Meditation can work wonders for people suffering from both mental health and sleep disorders. Meditation is an ancient practice that aims to clear the mind to achieve a heightened sense of awareness. Research shows that meditation can calm the mind, which can make achieving proper sleep easier. Meditation has been shown to help with insomnia, as it promotes a relaxed state. 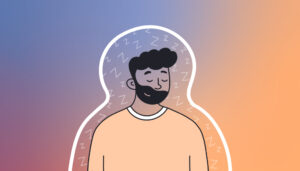 According to the National Institutes of Health, emotional wellness refers to the ability to properly handle life’s stresses and ups and downs. Emotional wellness is associated with a number of positive health outcomes, including obtaining proper sleep.

There are a few ways to test your emotional wellness, according to the University of New Hampshire. If you positively identify with most of the following, you’re likely emotionally well.

Though emotional wellness seems to be an inherent quality, some strategies can improve it. Reducing stress, getting quality sleep, learning helpful coping strategies, being mindful, and forging strong social connections are all ways to improve your emotional wellness.