Home » Reviews » DreamCloud Mattress Review – Is It As Dreamy As It Looks?

Hybrid mattresses are all the rage these days because they promise both soft comfort and strong support as well. Now, while we are big fans of hybrid mattresses, they aren’t always the most affordable – shoppers can usually expect to spend between $1500 and $2000 for a quality hybrid.

The DreamCloud is a high-quality hybrid mattress that is sold for a value price - click the button to save $200 on the DreamCloud mattress!

We enjoyed our experience with the DreamCloud mattress, but we think it is going to be a better fit for certain types of sleepers:

To find out if the DreamCloud is truly as dreamy as it sounds, make sure to watch our in-depth video review. Our reviewer, Marten, tries the mattress out for himself and discusses exactly what it feels like to sleep on the DreamCloud mattress!

When we are looking at a new mattress, the first thing we consider is how firm it is and what it feels like. Let’s break down how firm the DreamCloud is, what it feels like, and how it will work for average weight, heavyweight, and lightweight sleepers.

How Firm Is The DreamCloud Mattress?

In our experience, the DreamCloud mattress feels close to a 7.5/10, firmer-than-average – there is just a touch of plushness on top of the DreamCloud but, beneath that, the mattress is quite firm.

Sleeping On The DreamCloud

Sleeping on the DreamCloud, we feel best when we are on our backs because it is because the mattress is providing us with a great balance of comfort and support. Our hips sink into the plush foam layers on top, but they don’t sink in extremely far. In addition, we are held up by the supportive coils on the bottom of the DreamCloud.

Side sleeping on the DreamCloud, we are feeling some significant pressure on our shoulders and hips because we are pressing right through the top layer and really driving into the firmer support layers. As we will point out below, lightweight sleepers could feel better pressure relief than we did on the DreamCloud mattress.

At the same time, when we are stomach sleeping, the DreamCloud is not offering us the proper amount of support under our hips. We are bowing in at a center mass, and we can feel some strain in our lumbar area that could be an issue after a few more nights on the DreamCloud.

While the DreamCloud mattress does have some soft foam quilted into its cover, there is not too much of it. There is also some foam beneath this, but we are mostly feeling the coils when we lie on the mattress.

Because of this, we would say the DreamCloud has more of a traditional innerspring mattress feel that is also very responsive, making it easy to move around and change positions at night. 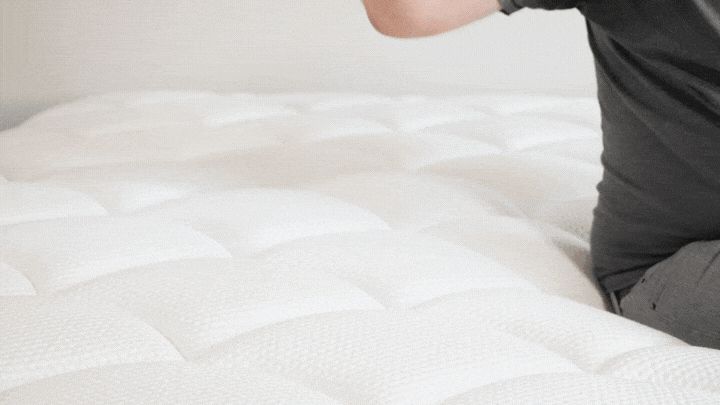 Back sleeping, average weight people should like how they feel on the DreamCloud; their hips will sink into the plusher foams on top while they feel the support of the coils beneath.

Unless they are beneath 200 lbs, average weight side sleepers might feel too much pressure when they are lying on the DreamCloud mattress. They could feel bunched-up around the hips and shoulders, and this could cause pain and discomfort over time.

Heavyweight sleepers who are closer to 230 lbs should get all the support they need on the DreamCloud mattress but, if they are closer to 300 lbs or more, the mattress might not be able to support their weight. Side sleeping, heavyweight sleepers should feel too much pressure on their shoulders and hips to be comfortable and, stomach sleeping, they probably won’t feel enough support under their hips.

The DreamCloud is a high-quality hybrid mattress that is sold for a value price - click the button to save $200 on the DreamCloud mattress!

Now, let’s pop the hood on the DreamCloud and see just what materials are found in this mattress and how they affect is overall performance.

On top, the DreamCloud features a smooth, comfy cashmere-blend cover – it is breathable, very soft to the touch, and is even tufted and quilted with some foam to give the top of the mattress a bit of that pillow-top look and feel.

Technically, the foam found in the cover would be the first comfort layer, but, beneath that, there is a layer of soft memory foam that is there to provide some pressure relief and comfort for sleepers. It is also infused with gel to prevent the material from trapping too much heat (a common occurrence with memory foam). Below that, there is a firmer foam transition layer that is there to keep sleepers from sinking too far into the mattress. 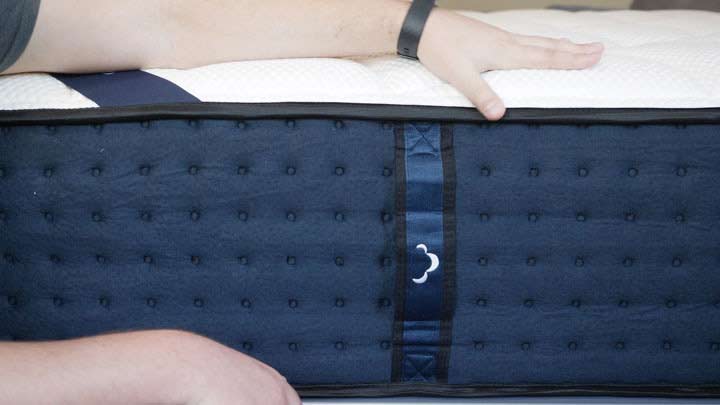 The DreamCloud mattress is 14″ tall, which is pretty average for a hybrid.

So, how much is the DreamCloud going to cost customers? Check out the following chart to see the most up-to-date size and price information.

Also, make sure to check out the DreamCloud Premier, their more luxury mattress, and don’t forget to use our money-saving coupon:

We ran the DreamCloud through a gauntlet of tests in regard to cooling, motion transfer, and durability – let’s see how the mattress fared!

Sleeping on the DreamCloud, we do feel quite cool because the mattress features a few temperature-regulating materials. The cashmere-blend cover is breathable and allows air to pass through the top of the mattress and the memory foam layer is infused with gel (good with heat dissipation). The individually-wrapped coils in the support layer also allow for air to pass through the mattress so that it isn’t one big block of heat. Overall, the DreamCloud should be a good option for hot sleepers who wish to stay cool throughout the night.

Couples who are looking for a mattress would be wise to keep motion transfer in mind; a mattress that cuts down on motion transfer between the two partners should ensure each sleeper won’t disturb the other when they move around. 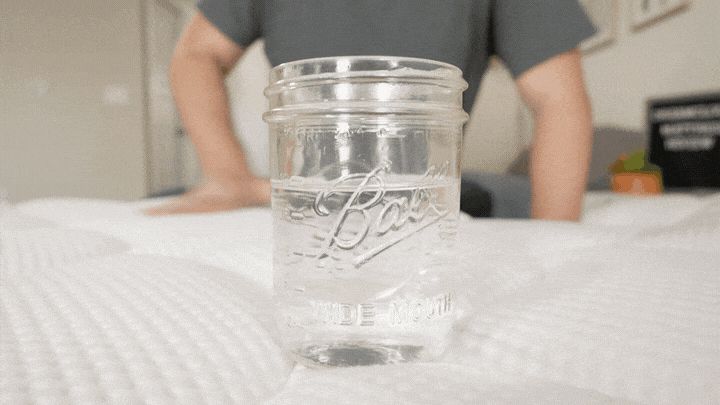 Testing out the DreamCloud, the mattress does not isolate this motion particularly well. When we placed a glass of water in the center of the mattress and pushed into the surrounding area, we did see some disturbance in the water. Our reviewer, Marten, also lay on one side of the mattress while someone moved around on the other side; he did feel that motion transfer to his side of the mattress.

While the DreamCloud features coils in its support layer, we did not see the best edge support with this mattress. Sitting near the edge of the DreamCloud, it did collapse quite a bit, and, lying down near the edge, we did feel like we might roll off the mattress. 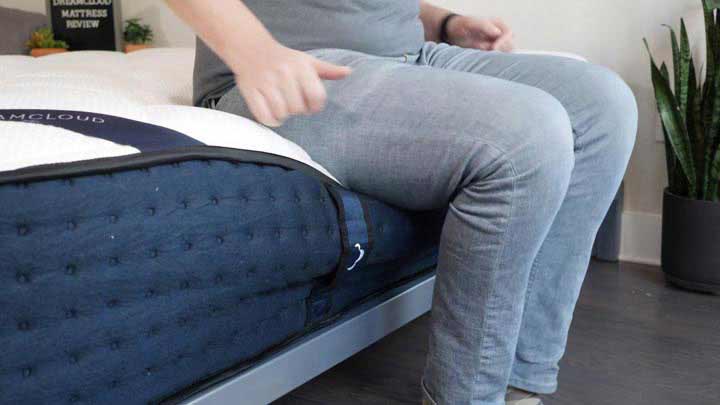 A mattress’s durability will depend greatly on how often sleepers use it and how heavy or light they are. That being said, just looking at the materials and construction of this hybrid mattress, we see it lasting for between 6 and 8 years.

Moving around on the DreamCloud mattress, we did not notice any real squeaking or creaking; the individually-wrapped coils would be the only material in the mattress we would expect to make noise, but we are hearing none.

Couples who are looking for a mattress on which to get intimate usually want to pick something that is bouncy and responsive; this will make it easier for them to move around and reposition on the mattress. The DreamCloud mattress fits the bill for sure, and sexual partners should find it to be a great match.

The DreamCloud mattress comes with a 365-night sleep trial and a Forever Warranty.

How Does The DreamCloud Compare To Other Mattresses?

Is everyone ready to do some comparison shopping? Let’s see how the DreamCloud compares to related mattresses: 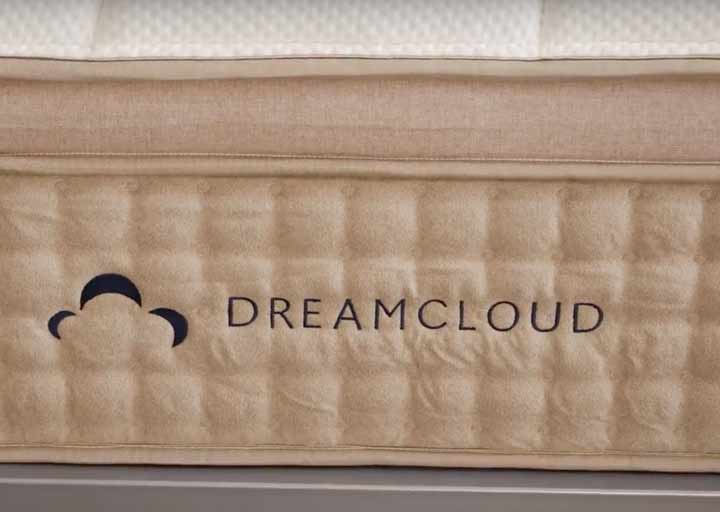 The DreamCloud and Saatva mattresses are somewhat similar in that they feature coils in their design and some plusher layers right on top. On closer inspection, they are slightly different, however, namely in their support layers – the DreamCloud features one set of individually-wrapped coils while the Saatva features two sets of coils (microcoils and support coils).

Between the two mattresses, the DreamCloud should be the better choice for stomach sleepers and, given that it costs a few hundred dollars less than the Saatva, it is a good way to save money. The Saatva, on the other hand, is going to work better for side sleepers and those who prefer a bit softer mattress.

Is DreamCloud a good mattress?

The DreamCloud is a good mattress, but it is a better fit for certain types of sleepers. Hot sleepers, back sleepers, and those who want a more responsive mattress should like the DreamCloud. Also, it is a great hybrid mattress sold for a value price.

Is DreamCloud good for side sleepers?

Do you need a box spring with the DreamCloud mattress?

According to the company, the DreamCloud mattress does not require a box spring.

How much does a DreamCloud mattress cost?

The DreamCloud ranges in price from $799 for a Twin up to $1299 for a King or California King.