It feels great to snuggle up under a big fluffy comforter on a chilly winter night; it’s like sleeping under an insulating cloud. What about when it’s not so chilly? What about when the days get longer and, no matter how low the AC set, it’s just impossible to sleep under a comforter without waking up hot and drenched in sweat?

Well, those hot sleepers out there should definitely take a look at the Casper Humidity Fighting Duvet – it’s in the name for crying out loud. Humidity. Fighting. The Casper contains some interesting materials that are designed to wick moisture away from the body and dissipate heat.

As a person who regularly struggles with sleeping hot, I was interested to see how the Casper would work for me; read on for my full Casper Humidity Fighting Duvet review!

Note: The terms “duvet” and “comforter” are sometimes used interchangeably. Because the Casper has the construction and design of a classic comforter, I will often be referring to it as a “comforter” in this article. Make sure to check out our article on the differences between duvets and comforters.

The Casper Humidity Fighting Duvet promises a comfy cloud of bedding without making you overheat.

Watch our video review for the Casper Humidity Fighting Duvet to see it in action!

Here at Mattress Clarity we love Casper mattresses like the Casper Original or the Casper Wave Hybrid mattresses because of their high-quality materials. The Humidity Fighting Duvet is no exception.

One thing to note – though this is called a duvet, its sewn through construction classifies it more as a comforter, which is what I’ll reference it as.

Let’s take a look at what all goes into the construction of this comforter.

On the outside, you’ll find a cotton shell. This is made out of 100% cotton, so it may feel crisp and could make some noise while you use it. But overall it feels very soft to the touch. Cotton has some natural breathability to it, which is great for airflow. 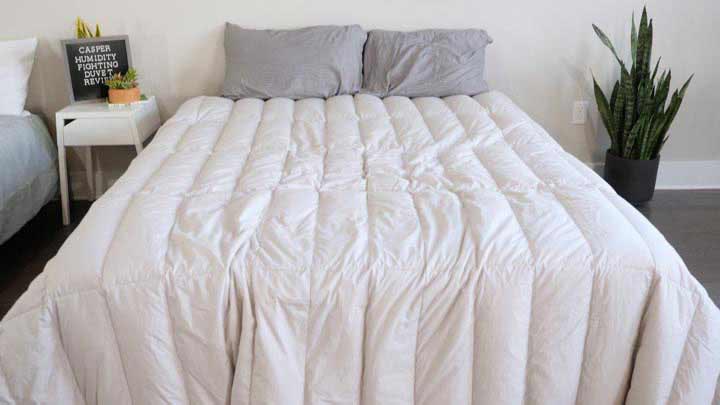 Currently, Casper only sells this in white. However, if you’re looking for color options, this comforter also acts as a duvet insert; there are corner loops that you can use to attach a duvet cover with the color of your choice to.

This cover has sewn-through chambers to keep the down fill in place and fluffy, which should prevent bunching!

On the inside of this comforter you’ll find two fill materials: a layer of merino wool and down clusters. This down has been certified by the Responsible Down Standard (RDS), meaning the down was responsibly sourced! 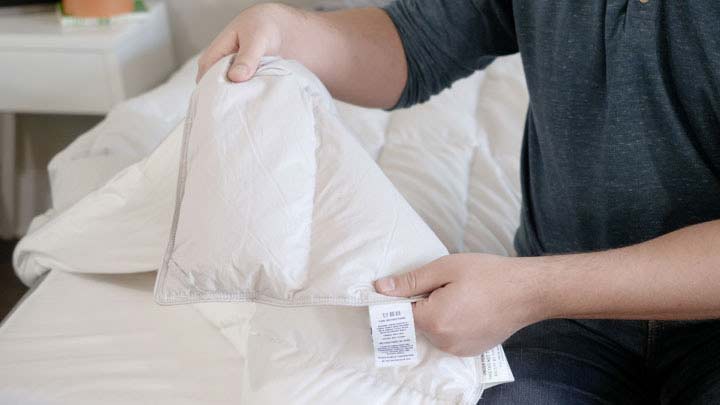 The merino wool has some moisture-wicking properties to it, so it will keep sweat off of you while you use the comforter.

This comforter has been designed with temperature regulation in mind. There are two warmth options available: lightweight and mid-weight. However, neither option is particularly warm, so if you’re after a thick winter comforter, you may want to look elsewhere.

For this review, we received the lightweight model.

This comforter isn’t listed as a hypoallergenic product. Down products also might trap allergens in your sleep environment, so if you suffer from allergies, it might be better to look at a down alternative comforter.

So, as a hot sleeper, how did I like using the Casper duvet?

Temperature regulation is the name of the game with this comforter. With a cotton cover and a thread count on the lower end, I could really feel the air flow through this comforter with ease.

And with the added layer of merino wool to wick away moisture, I wasn’t feeling hot and sweaty underneath. I’m happy to say that I didn’t kick this comforter off me during the night, which can happen with some warmer comforters. Overheating is a non-issue here. 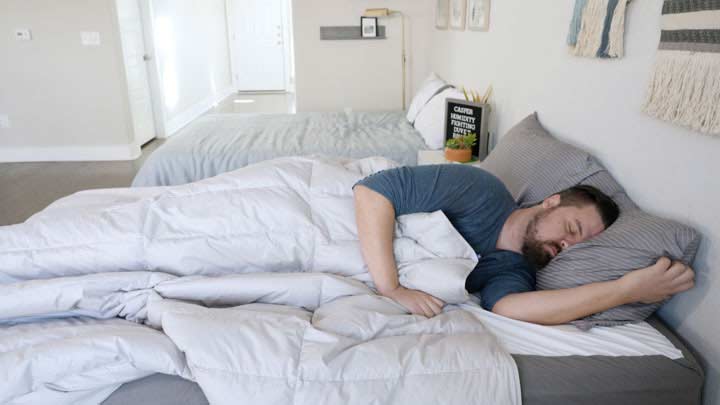 However, I would say that while this kept me at a comfortable body temperature, it might not be the best choice for some colder nights. If you’re looking for a fluffy comforter to keep you warm, maybe go with the mid-weight option or a different comforter all together.

Take a look at the up-to-date pricing information for the Casper Humidity Fighting Duvet in our chart below!

The Casper Humidity Fighting Duvet promises a comfy cloud of bedding without making you overheat.

Taking care of your Casper duvet is easy! Here’s how:

To start, you’ll machine wash with cold water on a gentle cycle. When done, you can tumble dry on low.

Casper recommends that you do not iron or dry clean the duvet. The chemicals used or the heat can ruin the down inside the duvet.

How Does the Casper Humidity Fighting Duvet Compare to Other Comforters?

Not sure if this is the comforter for you? It’s always a good idea to keep your options open, so let’s compare the Casper Humidity Fighting Duvet to two other comforters we’ve reviewed!

On the outside, the Casper and Layla comforters are similar. They both have cotton covers, though Layla’s is sewn with its signature hexagon pattern. Both feel relatively soft to the touch.

However, the main difference is on the inside. Layla’s comforter is a down alternative comforter that features Layla’s cluster loft. This material is designed to mimic down clusters. It’s going to provide a good amount of fluff and warmth to the Layla comforter. 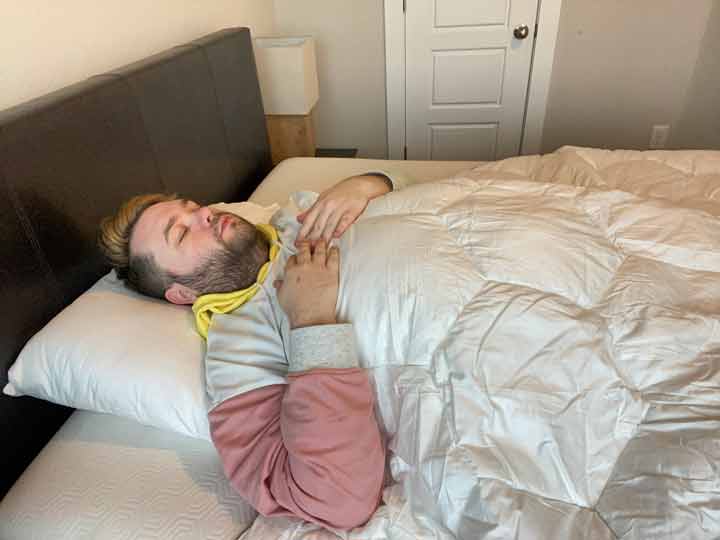 Casper’s humidity fighting duvet is going to be a better option for hot sleepers. The merino wool will wick moisture away and keep you from overheating during the night. Though Layla’s comforter is marketed as an all-season comforter, it will provide a good amount of warmth over the Casper comforter.

In terms of price, both are fairly high-end comforters, but Layla’s is a bit cheaper.

If you’re in the market for a luxury comforter, then the Cozy Earth comforter should be one to consider.

This comforter comes in two fill options: a bamboo fill or a silk fill. Regardless of your choice, you’ll find a smooth, soft to the touch bamboo cover on the outside of this comforter. Bamboo feels much different than the cotton shell you’ll find on the Casper comforter. 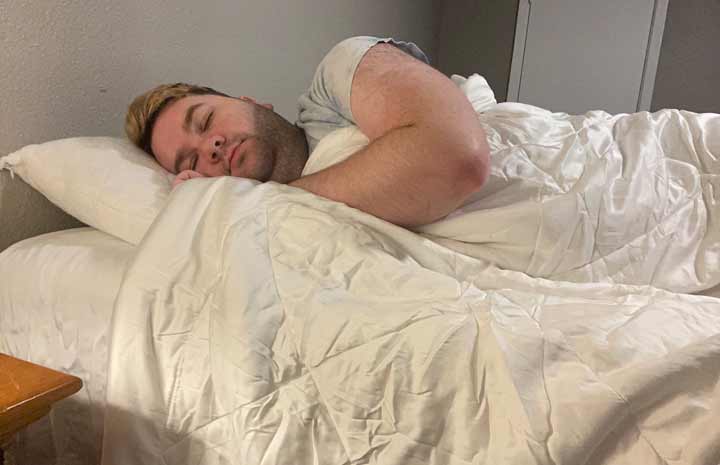 Both cotton and bamboo should be good choices for hot sleepers. However, I noticed that the Cozy Earth comforter did a better job at retaining heat just a little more than the Casper. So if you’re looking for a comforter that will keep you at a comfortable temperature, Casper’s is the way to go.

However, if you’re worried about the down trapping allergens, bamboo is great at fighting allergens in your sleep environment. If you suffer from allergies, the Cozy Earth comforter is a hypoallergenic option for you.

Who Should Get the Cozy Earth Comforter?

Want to see our Mattress Clarity score for this comforter? Take a look!

Casper Humidity Fighting Duvet Review
4.5 Overall
Summary
If you love using a comforter over a thin blanket, but don't want to worry about overheating, then the Casper Humidity Fighting Duvet is the answer you're looking for! It has many breathable and temperature regulating components to it, but it still feels nice and fluffy to use. Hot sleepers who love comforters should check it out!
Temp Regulation
Warmth
Fill Density
Durability
Fluffiness / Softness

Here’s what you can expect when you make a purchase with Casper.

The Casper Humidity Fighting Duvet comes with a 1-year warranty.

Casper offers free shipping and returns if you live in the contiguous United States and Canada. If you live in Alaska, Hawaii, the Yukon Territory, the Northwest Territory or Nunavut, you will have to pay extra shipping costs.

Casper offers a 30-day trial period for the Humidity Fighting Duvet. If you decide you don’t like it, you can send it back for a full refund so long as it’s within those 30 days.

How much does the Casper Humidity Fighting Duvet cost?

The Casper Humidity Fighting Duvet does not sleep too hot. It features a breathable outer shell and a layer of merino wool that will draw heat away from the body and wicks moisture as well.

How fluffy is the Casper Humidity Fighting Duvet?

The Casper Humidity Fighting Duvet is decently fluffy; it features duck down with good fill power. However, it is not a heavy comforter with tons of down, so it is not really a big fluffy cloud.

What is the difference between a duvet and a comforter?