The Buffy is a down alternative comforter that just recently hit the market and, in a short amount of time, it has become very popular. Personally, I was interested in its eco-friendly components and temperature-regulating properties.

To find out if the Buffy is a green option that will keep sleepers’ bodies at the perfect temperature, read on for my full review!

The Buffy is an eco-friendly comforter that features technology to fight overheating. 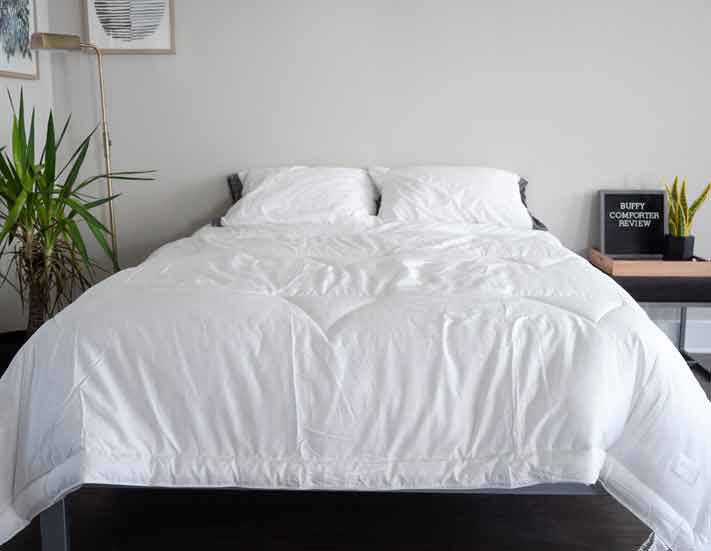 While lying under the Buffy, I can really feel the eucalyptus in the shell. First off, it feels very soft — softer than many cotton and microfiber comforter shells we have reviewed. In addition, it is worth noting that eucalyptus has anti-inflammatory properties and could theoretically help keep one’s skin smooth.

In addition, the eucalyptus in the shell can also help with cooling, and the cover also contains the 37.5 particles which can further cool sleepers when they are feeling hot. The comforter is cool to the touch and feels nice against the skin.

The Buffy is an eco-friendly comforter that features technology to fight overheating.

I expected the Buffy to be fluffier based on the advertising and product notes. When I took it out of the box, it did seem like it was going to be a very lofty comforter, however, once I unfolded the comforter, shook it out, and placed it on the bed, it appeared quite thin. 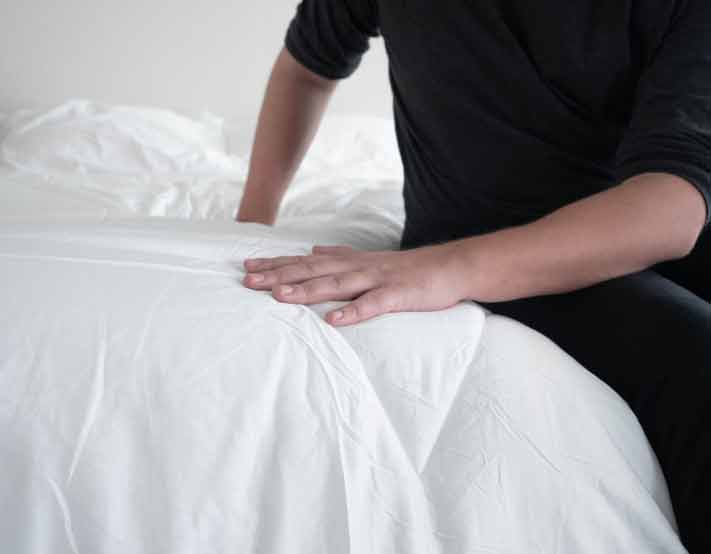 For a thinner comforter, the Buffy is surprisingly warm and, on colder nights, the comforter was very insulating and another layer of bedding was not necessary.

However, when it was warmer outside, I did overheat somewhat. For a down alternative comforter, the Buffy has decent breathability but, considering the eucalyptus fabric and 37.5 technology, it does not sleep extremely cool.

It is possible that some people could find this to be a good fit even on warmer nights. However, most hot sleepers should consider a cooler, more breathable comforter.

One of the upsides of down alternative comforters is that they are machine washable. This means the Buffy comforter can be cleaned in an industrial-sized washer and dryer. However, the company says:

“We recommend that you dry clean the Buffy to keep it in tip-top shape. Buffy is only machine washable in a large industrial washing machine. Smaller washing machines may damage the Buffy. The Buffy is made from ingredients to love and care for, and dry cleaning will ensure it lasts a lifetime.”

In addition, they recommend putting the comforter in a duvet cover, so that one can simply take the cover off and wash it at home.

In the end, I was impressed by the green, eco-friendly nature of the Buffy comforter, and the responsibly sourced eucalyptus and recycled fill made me feel comfortable knowing this was a more environmentally sustainable product. The comforter was also warm and insulating, and I did not need another layer on colder nights.

However, I did find the comforter to be thin. I prefer a fluffier comforter, especially when I plan on using it on colder nights. In addition, as a hot sleeper, the Buffy did cause me to overheat somewhat.