Weighted blankets have recently become a seriously hot ticket item; as a reviewer of weighted blankets, I find it difficult to keep up with the ever-growing market. Bed-in-a-box mattress companies are a big part of this growth, and I have personally tried weighted blankets from Purple, Brooklyn Bedding, and Layla.

Now, here comes Casper with their weighted blanket option – it is a throw-sized weighted blanket that comes in three weights. Having tried numerous weighted blankets, I was interested to see how the Casper would compare. I am a fan of their mattresses, pillows, and other products, so I was excited to dive in!

To find out how it performed during my tests, read on for my full Casper weighted blanket review.

The Casper Should Work For … 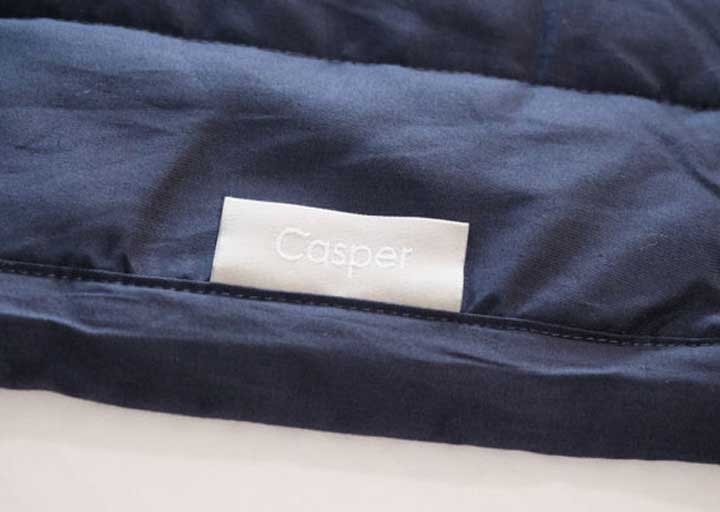 First off, as I mentioned above, the Casper is available in three weights: 10 lbs, 15 lbs, and 20 lbs. Casper recommends choosing a blanket that is approximately 10% of one’s body weight. This means the Casper weighted blankets could work for people between 80 and 220 lbs.

The blanket is only available in a throw-size that is 50″ x 70″ – the blankets are narrow and do not reach to the edges of a Queen size mattress. 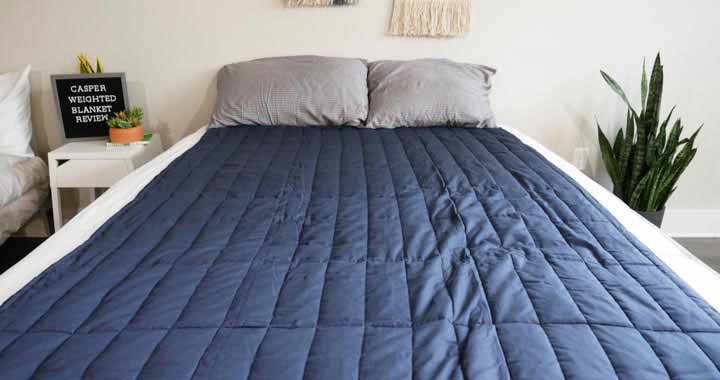 The Casper’s outer shell is made of 100% cotton and is stitched in a rectangular grid pattern. Most weighted blankets feature square gridding, but the Casper’s design is based more on performance sportswear. Inside, glass beads provide the Casper weighted blanket with its actual weight and some polyester batting adds just a bit of body.

The weighted blanket is not machine washable but, according to Casper, it can be spot cleaned.

I weigh 250 lbs and, usually, I opt for a weighted blanket that weighs at least 25 lbs. Given that Casper’s heaviest offering is 20 lbs, I went with that version. While I am getting a decent amount of weight from the Casper, I would like a few more pounds.

However, the Casper’s narrow width does help out somewhat; being thinner, the 20 lbs of weight are concentrated in a smaller area. I am getting the same weight concentration I would get on a much wider 25 lb weighted blanket. This narrow width and the rectangular gridding makes it feel like the blanket is hugging my body, and it is a nice feeling.

This gridding also provides the Casper with some excellent weight distribution. The gridding is very narrow, and I feel like the blanket’s weight is evenly distributed across my legs and chest. I would go so far as to say this is some of the best weight distribution I have experienced. 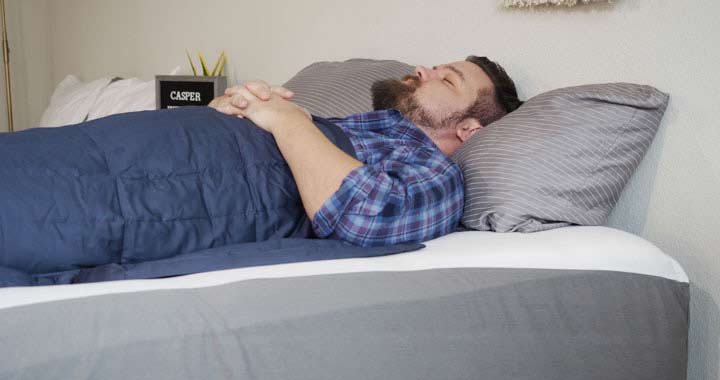 As a hot sleeper, I often worry that I will overheat under my weighted blanket. That is not a major issue with the Casper – it features a breathable cotton outer shell that keeps the blanket nice and breathable. Napping or sleeping under the Casper, I do not wake up hot and sweaty.

If people want to try out the Casper, the company offers a 100-night sleep trial as well as a 1-year limited warranty.

What are the benefits of a weighted blanket like the Casper?

How heavy should your Casper Weighted Blanket be?

Like most weighted blanket companies, Casper recommends that customers find a blanket that is close to 10% of their body weight. For instance, if someone weighs 150 lbs, a 15 lb weighted blanket would be the best choice.

Will the Casper Weighted Blanket make you sleep hot?

The Casper Weighted Blanket should not make people sleep too hot; it features a cotton outer shell that is breathable and allows for good airflow. While it does add a bit of warmth, the Casper should not cause sleepers to wake up hot and sweaty.