When we hear the words “Puffy Royal mattress,” a certain image come to mind – a cloud-like mattress fit for a king or queen, complete with a four-post bed. And that does seem to be what Puffy is promising with their most high-end mattress. It is designed to offer superior comfort and an overall plush sleeping experience.

Does the Puffy Royal really give sleepers the royal treatment? Read on for our full Puffy Royal mattress review!

The Puffy Royal is a high-end all-foam mattress that should be a great choice for lightweight adults, children, and teenagers.

When Puffy first hit the bed in a box scene, they offered just one mattress, the Puffy Original mattress. Since then, they have added two more mattresses to their line, the Puffy Lux and the Puffy Royal. All three mattresses are also available in all-foam and hybrid versions as well.

The Puffy Royal is their most high-end model and features multiple layers of high-quality foam, as well as a proprietary, zoned construction. Trying out the all-foam Puffy Royal mattress, we found it to be a good fit for certain people but not others:

Now, we will run through exactly how firm the Puffy Royal mattress is and how average weight, heavyweight, and lightweight sleepers will feel sleeping on it.

How Firm Is The Puffy Royal?

In our experience, the Puffy Royal all-foam mattress feels like a 6/10, softer-than-average. The mattress is particularly plush as it contains four comfort layers above a base layer. As we will discuss below, the mattress might feel softer or firmer depending on a person’s size and weight.

Sleeping On The Puffy Royal

Side sleeping, we are feeling almost no pressure on our shoulders and hips, but we could actually need more support. Side sleepers require pressure relief, yes, but they also need something that will press up into their gaps and keep them properly aligned. We aren’t bottoming out per se, but we need some more support from lower in the mattress to really hold up our bodies.

Stomach sleeping, the Puffy Royal is indeed too soft for us and we can feel out pelvis dipping far into the mattress. Even after a short time, we can already feel some strain in our lower backs.

In terms of feel, “puffy” seems to be the correct moniker for the Puffy Royal mattress. It features soft memory foam that exhibits some of that classic slow-moving feel but, overall, the mattress is more puffy and cloudlike – it almost feels like lying on a large airy pillow. 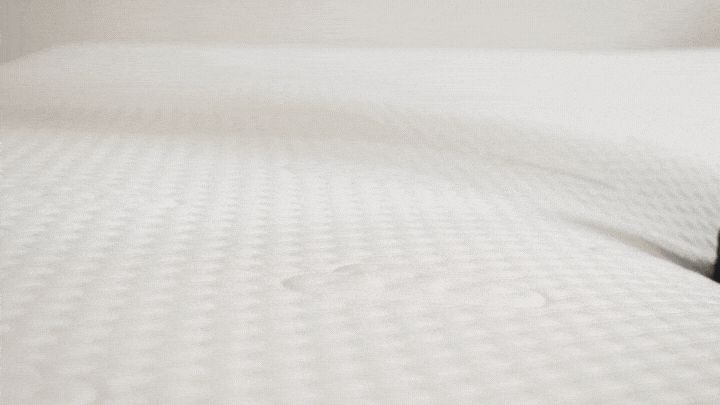 Average weight sleepers who weigh close to 130 lbs might get enough support when they are lying on the Puffy Royal all-foam mattress. If they are heavier and closer to 230 lbs, they might want to opt for the hybrid model of the Puffy Royal.

Side sleeping, average weight people who weigh under 200 lbs should find the Puffy Royal all-foam mattress to be a good fit. The multiple layers of plush foam on top of the Puffy Royal should offer all the pressure relief that they require. They might even feel the zoned polyfoam layer helping to fill in the gap between their ribcage and the hips.

The Puffy Royal will most likely feel too soft for average weight stomach sleepers, and they should feel their hips sink too far into the mattress.

The Puffy Royal all-foam mattress won’t work too well for heavier back, side, or stomach sleepers. They won’t feel enough support when back sleeping and stomach sleeping. Side sleeping, they will need more support to keep them in proper neutral alignment.

Larger people will most likely prefer the hybrid model of the Puffy Royal, as it should give them better support in all three positions.

The Puffy Royal is a high-end all-foam mattress that should be a great choice for lightweight adults, children, and teenagers.

Now, let’s unzip the cover of the Puffy Royal and see what materials we find inside. We’ll go layer-by-layer and discuss how each material will affect the overall performance of the mattress.

The Puffy Royal mattress features a polyester cover that is soft, breathable, and won’t affect the overall feel of the mattress too much.

The Puffy Royal mattress features a whopping four comfort layers. On top, there is a layer of memory foam that boasts that comfortable, slow-moving feel. It is also infused with cooling beads to prevent it from trapping body heat (a major issue with most memory foam). 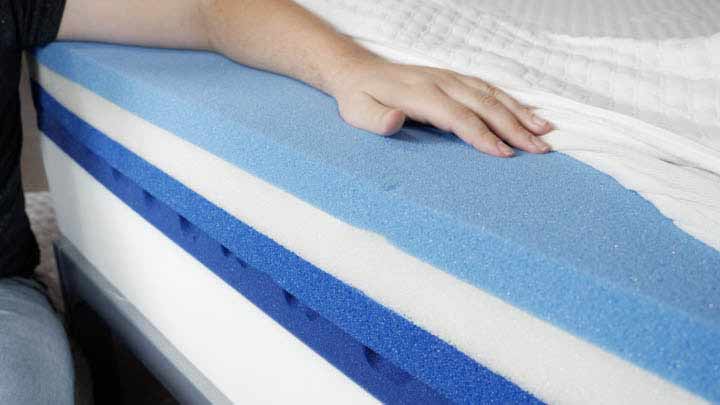 Below that, there is a layer of more responsive foam which provides some more bounce to the top of the mattress. This sits atop another layer of foam with that slow-moving memory foam feel. It is also designed to regulate the temperature of the mattress and keep it sleeping cool throughout the night.

Finally, there is a layer of polyfoam that features Sectional Cloud Technology; basically, it features five zones that provide varying degrees of support and comfort. The idea is to make the mattress feel more supportive when people sleep on their back and stomach, and more pressure-relieving when they are on their side.

The all-foam version of the Puffy Royal features Firm Core Support foam – this is basically high-density base foam.

For the most up-to-date sizing and pricing information for the Puffy Royal, take a look at the following chart:

We put the Puffy Royal mattress to the test with regard to cooling, motion transfer, and durability – let’s see how it did!

Like the other Puffy mattresses, the Royal takes cooling very seriously. It features gel and other cooling infusions that are designed to prevent the foams from trapping too much heat. Also, the layer of zoned foam leaves a good amount of room for airflow toward the center of the mattress. All-in-all, the Puffy Royal should sleep quite cool for an all-foam mattress, but those who want even more airflow can opt for the hybrid model. 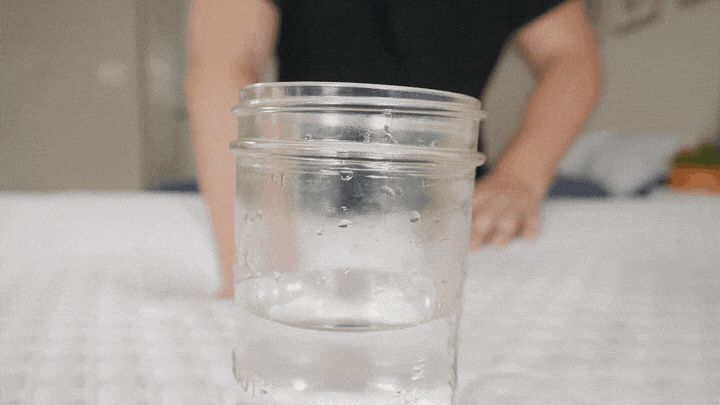 When we sit down near the edge of the Puffy Royal mattress, it does collapse under our weight. We need some more support because we feel like we might pitch forward. This is similar to how we feel when we are lying down near the edge – it collapses, and we feel like we might roll off of the mattress. Couples and people who want to sleep toward the edge of their mattress might want to at least consider the Puffy Royal hybrid model. 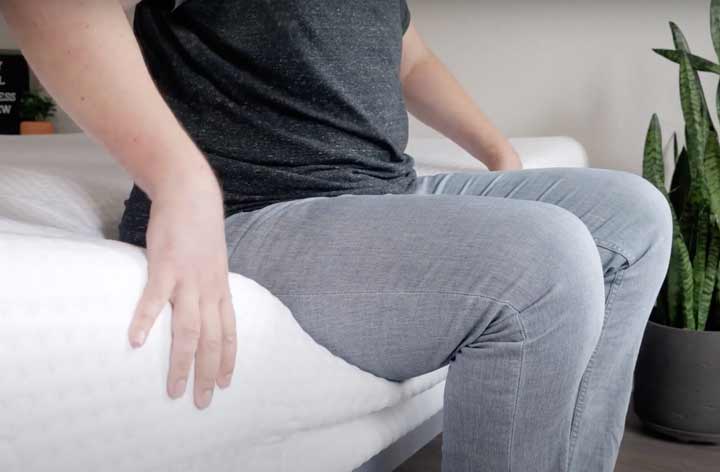 Just looking at the construction and materials of the Puffy Royal, it appears to be a somewhat durable mattress. Depending on the weight of the owner and how often they use it, the Puffy Royal should last for at least seven years.

The Puffy Royal is a bed in a box mattress, so it did let off a slight chemical smell when we unboxed it. This is normal for a mattress that contains memory foam, and the smell did dissipate after 48 hours.

Moving around on the Puffy Royal, we did not hear any real squeaking or creaking. Overall, it is a pretty silent mattress.

The Puff Royal comes with a 101-night sleep trial and a lifetime warranty.

How The Puffy Royal Compares With Other Mattresses

Now, let’s talk about how the Puffy Royal compares to the original Puffy as well as some of its other competitors.

The Puffy Royal and Casper Wave Hybrid are both high-end models from their respective companies. They are similar in a few notable ways; they both feature zoning somewhere in their construction, and they are both softer mattresses.

However, we are looking at the Puffy Royal all-foam model today, so who should choose that, and who should choose the Casper Wave Hybrid? Well, the Puffy Royal should be a better option for lightweight sleepers, specifically those that sleep on their sides. The Casper Wave Hybrid should be the better choice for larger people and back sleepers who require more lumbar support.

Like the Puffy Royal and Casper Wave Hybrid, the Purple Hybrid Premier 4″ is the most deluxe mattress from its respective company. It is a very unique mattress that features coils in its support layer and a hyper-elastic gel polymer in its comfort layer. The polymer forms a grid that is both supportive and pressure-relieving at the same time – there really is no other mattress material like it. The Puffy Royal, as we have discussed, is a high-end mattress with a zoned construction. 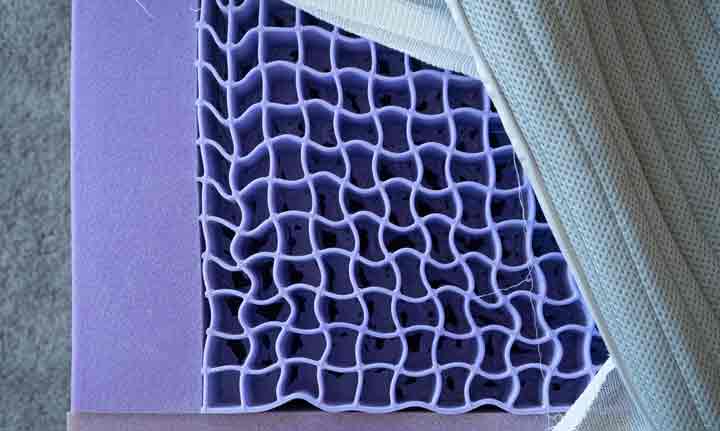 Based on these differences, these mattresses are going to be a better fit for different types of sleepers. The Puffy Royal should be a better option for lightweight sleepers and those who prefer more of a foam feel overall. The Purple Hybrid Premier, on the other hand, should be better for larger sleepers and hot sleepers who need a mattress with better airflow.

Now, let’s answer some of the most frequently asked questions about the Puffy Royal mattress.

Is Puffy Royal worth the money?

The Puffy Royal is worth the money if someone is looking for a high-end mattress for lightweight sleepers. If they are heavier, they might want to invest in a more supportive mattress overall.

How long does it take for the Puffy Royal mattress to expand.

The Puffy Royal takes between 24 and 48 hours to completely expand and off-gas.

The Puffy Royal mattress does not sleep particularly hot. It features cooling infusions and a zoned layer that allows for air to flow through the center of the mattress. Those who want even more airflow can opt for the hybrid version of the Puffy Royal.

Is the Puffy Royal mattress good for side sleepers?

The Puffy Royal mattress should be a good option for light- and medium-weight side sleepers. Larger side sleepers should get enough pressure relief, but they might not get enough support to keep them properly aligned.