Home » Reviews » Casper Vs Nectar Mattress- Which Should You Choose?

If someone is looking for an all-foam mattress, they have probably come across the Casper and Nectar mattresses somewhere on the Internet. They are two of the most popular mattresses on the bed-in-a-box market and for good reason.

While at first it may seem that there many similarities between the mattresses, there actually a lot of differences as well.  This article will go through the construction of both mattresses in detail and highlight the main takeaways consumers should know about before making a buying decision. 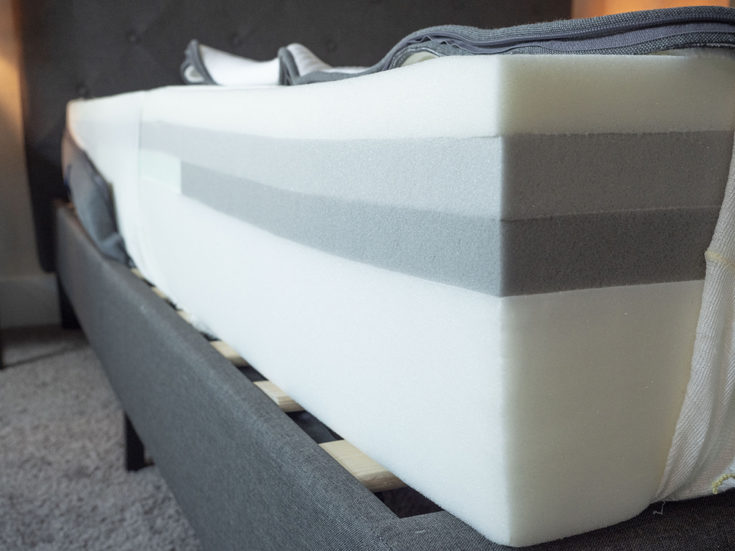 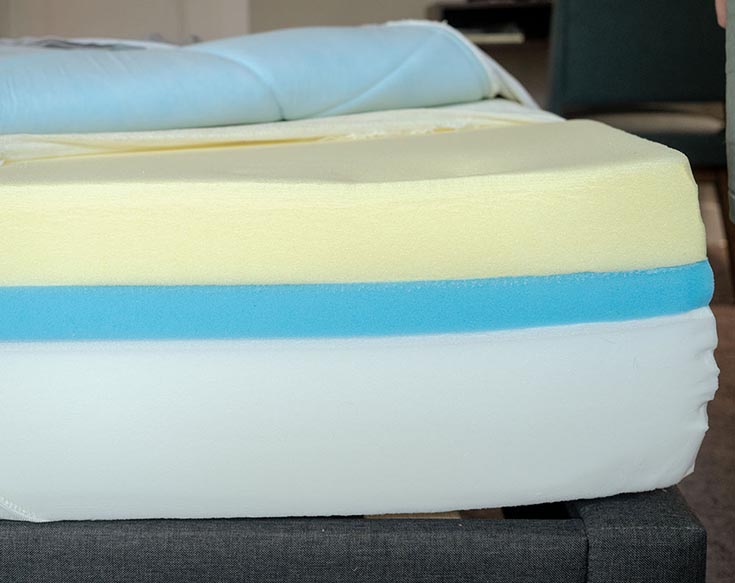 From personal experience, both mattresses generally have a similar firmness. They both feel like a 6/10, just softer-than-average compared to other mattresses reviewed in this website.

Back sleeping on the Casper, I feel very well supported and comfortable. The Zoned Support ensures that my hips don’t sink in too far. When I am on my side, I also feel that Zoned Support going to work. The mattress is soft under my shoulder, so I feel great pressure relief there. On my stomach, I feel decent support, but I would probably want a firmer and more supportive mattress if I were just a stomach sleeper.

On the Nectar, I also felt good support on my back. My hips sink in just the right amount, and the thick layer of memory foam conforms to the curves of the body. However, I would say I feel better back sleeping on the Casper because of the effectiveness of the zoned support.

When I am on my side, I feel a little firmness at first, but then I slowly start to sink in, and I feel almost no pressure on my shoulders. When I am on my stomach, I don’t feel well supported and would want a firmer mattress ideally.

The Casper has a balanced foam feel overall that feels like a combination of multiple types of foam. The latex-like layer is responsive, so I don’t have trouble moving around. In addition, the Zoned Support keeps me from sinking in too far. It definitely feels like I am sleeping on top of the mattress as opposed to sleeping in it.

The Nectar has a classic memory foam feel where I slowly sink in, and the mattress envelops me. It is very slow moving, and I sink in quite a bit. So, it is not as easy to move around on the Nectar or switch positions.

See more about the Casper’s balanced foam feel in the video below.

Now, see what I thought of Nectar’s classic memory foam feel with the video below.

When it comes to motion transfer, few materials handle it as well as memory foam because of its chemical nature. While both mattresses have memory foam somewhere in their construction, the Nectar has a thick layer on top, which is ideal for motion isolation.

Because of this, the Nectar deals with motion transfer better than the Casper. During my tests, the glass of water was barely disturbed when I pressed into the mattress. Also, when Marten moved around on the other side of the mattress, I barely felt his movements on my side.

Overall, the Nectar is a better mattress for couples who don’t want to be disturbed by their partner’s movements.

See how the Casper performed during my motion transfer tests in the video below.

Compare this to the Nectar’s motion transfer with the video below.

While foam is quite good at handling motion transfer, it is sometimes not the best when it comes to edge support. Since both of these are all-foam mattresses and softer-than-average, I was not surprised by their lack of good edge support.

Sitting near the edge of both mattresses, the top layers collapsed pretty easily. Lying down near both their edges, I had a bit of that feeling that I might roll off the bed.

People can see the edge support of both mattresses in the photos below. 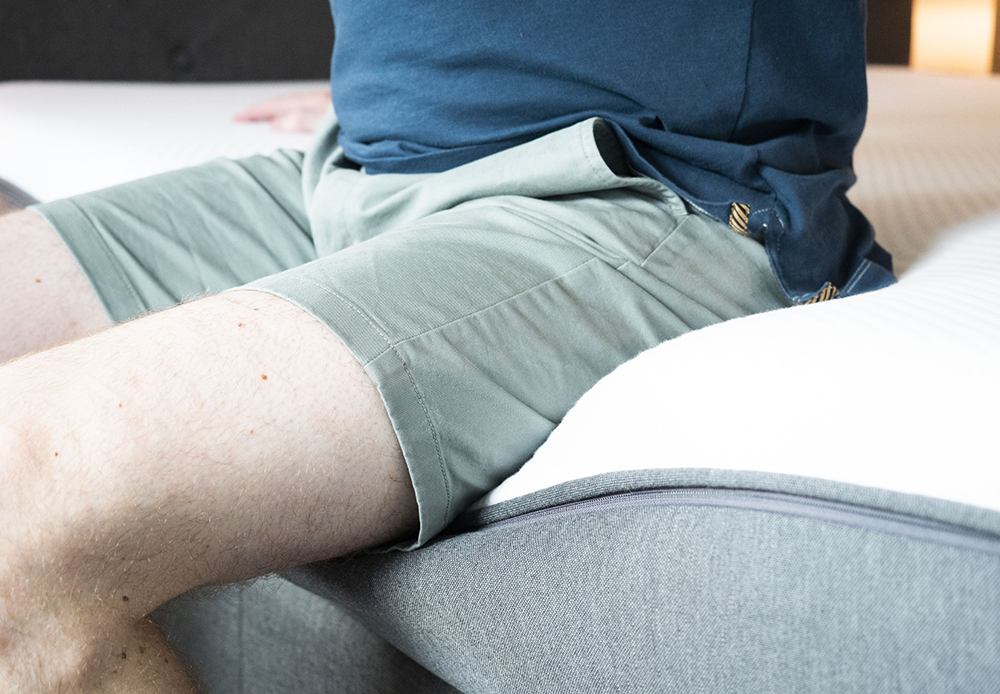 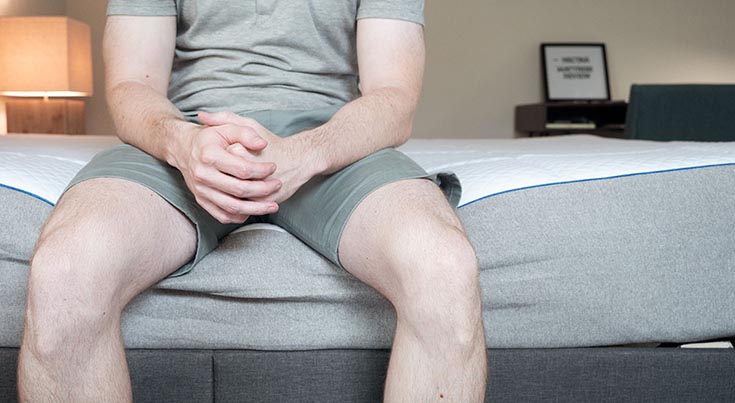 Marten is a staff writer for us and has a much different body type from me. He is 6’7″ and weighs about 230 lbs (I am 5’9″ and 160 lbs.). Here is what he thought about these mattresses and fitting they are for heavier sleepers:

I said the Casper was a 7/10 in terms of firmness and the Nectar was approximately a 6/10.

Back sleeping on the Casper, I feel very nice and feel the Zoned Support holding me up. On my side, I feel a little pressure on the shoulders and hips. When I’m on my stomach, I feel good overall support, becuase the Zoned Support is keeping my hips from sinking in too far.

On the Nectar, I also feel well supported on my back, but it’s definitely different in terms of feel. It has that classic memory foam feel that resembles quicksand. So, my hips sink in, and I feel the memory foam pressing up into the lumbar area.

When I’m on my side, I feel some firmness at first, but then I slowly sink into the mattress and feel very little pressure on the shoulders and hips. On my stomach, I definitely need more support and am bowing in the hips.

If someone is a heavier back sleeper, both mattresses could work for them. It’s more about what feel they tend to prefer. Casper gives people that balanced foam feel, and Nectar offers that classic memory foam feel.

While I thought the mattresses were the same in terms of firmness, Marten thought the Casper was firmer. This is often the case with heavier sleepers and foam mattresses. They may press further into the mattress and engage the lower layers. With the Zoned Support so near the top, Marten is probably pushing into that and feeling more firmness.

Who Should Pick Casper:

If people consider all this information, it should be easy to choose between the Casper and Nectar because the differences are quite clear. Combination sleepers who like to sleep on top of their mattress should pick the Casper, while fans of memory foam who want to save some money should go with the Nectar. Please leave any specific comments or questions about the Casper or the Nectar in the comment section below.