When it comes to comforters, little compares to down fill and, while it is often more expensive, that fluffy, warm, and breathable bedding offers a level of comfort rarely found with a down alternative comforter.

To find out if this is the cozy comforter we’ve been waiting for, read on for my full Egyptian Bedding review.

The Egyptian Bedding Should Work For …

The outer shell of the Egyptian Bedding is very soft to the touch, and I can really feel the difference that 600 thread count Egyptian cotton makes. While lying under the comforter, it did not feel rough against my skin.

Again, if someone wants to add a duvet cover for aesthetic or feel purposes, this comforter can be used as a duvet insert. It has eight tabs, which makes it easy to secure the comforter within a duvet cover.

This Egyptian Bedding comforter is very lofty and rises inches above the mattress.

There are two features that give the comforter such a full body. First, the comforter is constructed with a baffle box design that keeps the down fill evenly distributed throughout the comforter and also creates a three-dimensional space for the down to fully expand. Second, the down has a high fill power of over 750 which means it has a nice, natural loft.

The comforter is advertised as “All-Season,” but I found it to be more of a cold or temperate weather comforter. On warmer nights, I needed to move out from underneath the comforter to keep myself from overheating.

However, even for a warmer comforter, it didn’t smother or stifle me as often happens when I use heavier down alternative comforters. This comforter, on the other hand, had plenty of airflow, and it didn’t feel stuffy at all.

As with most down comforters, the company recommends taking the comforter to the dry cleaner for proper cleaning.

One can also spot-clean specific stains or, if worried about washing, try using a duvet cover.

RELATED: Caring For Your Down Comforter

For those who are looking for a fluffy down comforter and don’t want to spend $300, this could be a great deal. It offers that cloud-like down experience and should keep sleepers warm without making them feel stuffy. However, those who need a comforter for the warmer months or struggle with allergies might want to look elsewhere. 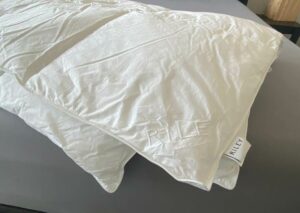