I hate getting out of bed in the morning because the promise of icy wooden floors and early morning drafts rarely seems inviting.

Bedding company Late Mornings says that they designed their products to make it even harder to get out of bed in the morning. Their sheets, linens, and duvet covers are reportedly so comfortable, we’ll all want to make it a late morning while sleeping under them.

We are entering the colder months, so I opted to review the Late Mornings sateen duvet cover. Climbing underneath the smooth material, I was wondering if it would be even harder to get out of bed the next morning.

To find out whether I had a late morning or not, read on!

Late Mornings designed their products to make it even harder to get out of bed in the morning. Their duvet covers are reportedly so comfortable, we’ll all want to make it a late morning while sleeping under them.

The Late Mornings Might Be A Good Fit For… 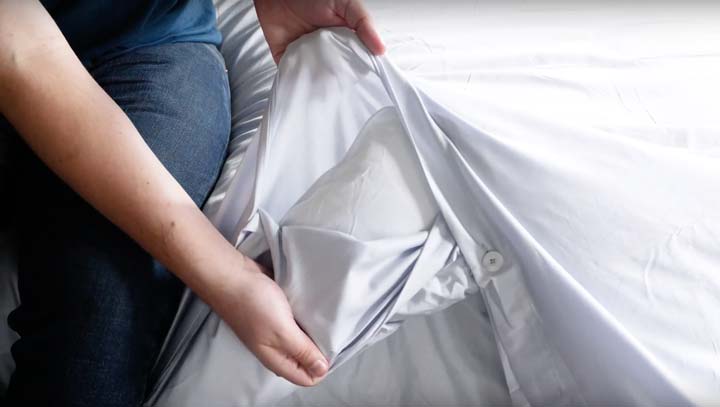 The Late Mornings Might Not Be A Good Fit For…

The Late Mornings duvet covers come in a few designs, and customers can choose from percale, sateen, Supima, and linen duvet covers.

The sateen duvet cover comes in three colors: Purple, Soft Grey, and White. I opted for the Soft Grey, a nice neutral color to add to my bed. 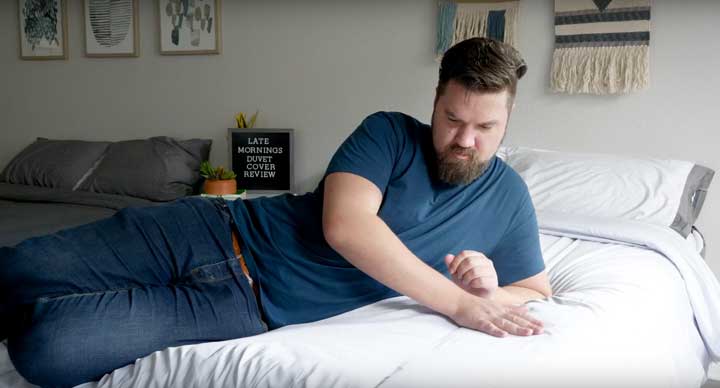 Let’s talk quickly about sateen fabrics. Sateen is a thicker type of weave that is usually warmer than percale, and it is also a silkier material that offers the feel of satin without the shocking price tag. Also, speaking of price tags, this model currently goes for $139 for the Full/Queen size. Those who want something even bigger can choose the King/California King size for $149.

The duvet cover itself is made out of 100% combed cotton with a 300 thread count. Late Mornings never uses harmful chemicals to treat their fabrics and all materials are OEKO – TEX certified.

The Late Mornings duvet cover does not have the duvet ties that one usually finds in other types of duvet covers, and it was honestly surprising not to see them inside.

The open end of the Late Mornings also features a button closure and comes with two free pillowcases.

Late Mornings designed their products to make it even harder to get out of bed in the morning. Their duvet covers are reportedly so comfortable, we’ll all want to make it a late morning while sleeping under them.

Just running my hands across the Late Mornings duvet cover, it feels quite silky. When I lie underneath the Late Mornings, I like the feel as it moves over my legs and arms. It is not quite as smooth as true satin sheets but, for the price, it feels pretty fantastic. Also, the material is not too wrinkly.

While this sateen is smooth, it is not the most breathable. This is pretty normal for sateen, so I am not too surprised by how warm I sleep underneath the Late Mornings. As I said earlier, I reviewed the Late Mornings on some colder nights, and it was nice to snuggle with. 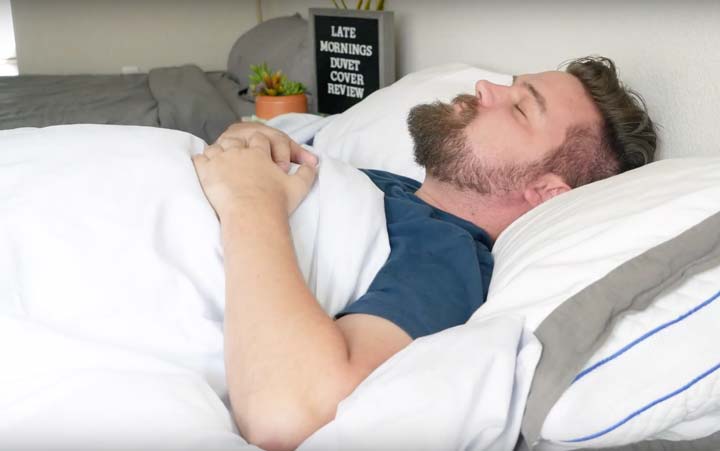 One of the reasons I personally like to sleep with a duvet cover is the ease of cleaning. I am not the cleanest person, and it is much easier to clean a duvet cover than a duvet insert or comforter.

To care for the Late Mornings sateen duvet cover, the company recommends the following:

Well, I can say now that the Late Mornings did not help me get up in the morning, and that is a good thing! The silky, insulating sateen created a soothing warmth around my body. For those who want a duvet cover for those cooler nights, I highly recommend the sateen duvet cover from Late Mornings.

How much does the Late Mornings duvet cover cost?

The sateen model of the Late Mornings duvet cover costs around $139 for the Full/Queen-size and $149 for the King/Cal. King-size. The Supima and linen model cost a bit more.

What does the Late Mornings sateen duvet cover feel like?

The Late Mornings sateen duvet cover is silky and smooth to the touch. It will feel nice as it lays against the skin.

This Late Mornings model is made with a sateen weave, a weave that isn't very breathable. Even paired with a lighter duvet insert and comforter, it might sleep somewhat hot.