In what is being regarded as the first online survey about the use of music as a sleep aid, researchers from the University of Sheffield in the U.K. found that nearly 62 percent of survey respondents fall asleep listening to music.

We spoke with study author Victoria Williamson, Ph.D., who teaches in the Department of Music at the University of Sheffield in the UK, to learn more about this study and its takeaways.

Artists including Johann Sebastian Bach, Ed Sheeran, Chopin, and Coldplay topped the list of musicians that help people drift off.

The online public survey collected data from 651 participants and scored responses on musicality, sleep habits, and what each person shared in terms of the music helps them sleep and why.

Results from the study, which were published in journal PLOS ONE, also showed that younger respondents who reported higher levels of engagement with music were much more likely to use music as a sleep aid. Respondents wrote that they believed music helps stimulate sleep and also blocks both internal and external stimuli that could disrupt sleep (1).

Music to Sleep To

Sixty-two of the 651 respondents said music helped them fall asleep and collectively listed 14 musical genres comprising 545 artists, according to the study.

“Headlines have focused on the ‘top sleep artists’ in our study, but whilst there were favourites this finding actually belies a wealth of musical richness that people access when they have trouble sleeping,” Williamson told Mattress Clarity.

RELATED: Check out this Sleep-Expert-Curated Playlist 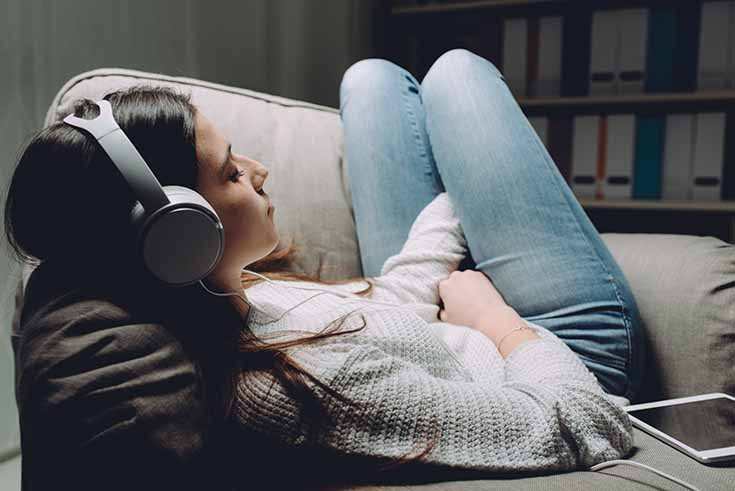 Williamson said the team had intended to look into the musical patterns of sounds that reportedly work well for people, but now their plan will require more consideration, as there don’t seem to be many commonalities in factors such as tempo, tonality, or pitch.

“Our current theory to explain this outcome is that familiarity and liking may have more of a role in the power of music to help sleep than simple musical structures, and hence the key ingredient for successful sleep music is the listener themselves; their music listening history and preferences,” Williamson said.

One thing was clear: People certainly seem to like listening to Ed Sheeran in order to fall asleep. A 2015 report from the music streaming service Spotify revealed that the British singer and songwriter was “the world’s favorite choice when choosing music to unwind.” His track, “Thinking Out Loud,” ranked as the most-streamed song in the U.S. and globally across Spotify’s ‘sleep’-themed playlists.

“Ed Sheeran likely featured highly in our survey as a result of his current popularity and download success, first and foremost,” said Williamson. “Beyond that, there are a number of features that may have contributed to this result such as the tempo of the tracks people identified, which tended to be slower than average for the genre, and the simplicity of the musical arrangements, which often featured only soft acoustic guitar and voice.”

The variety of music chosen by people as part of their sleep routines surprised the team, said Williamson. She told Mattress Clarity that the next steps are research studies that will build on the insights from this survey and use objective sleep measures to assess the impacts of music on different aspects and stages of the sleep process.

“We aim to understand how music impacts… both our brain and body sleep patterns, with a view to better advising people on exactly how music can best support healthy, restorative sleep,” she said.

In the meantime, we’ll fall asleep to Ed tonight.