Skip to content
Home » Lifestyle » Sleep News » This Is The #1 Ranking City For Sleepiest Employees
We receive free products to review and participate in affiliate programs, where we are compensated for items purchased through links from our site. See our disclosure page for details.

Nashville tops the list as the city with the highest percentage of tired workers, according to a survey conducted by staffing firm Accountemps. Denver, Austin, and Indianapolis all tied the list for the second place spot.

“Considering all the discussion surrounding work-life balance issues in the business community and in the media, it wasn’t a huge surprise to learn that many employees are tired,” Accountemps District President Karen Warren told Mattress Clarity via email. “People are having a tough time juggling work- and home-life responsibilities and they skimp on sleep to meet the demands of daily life. But it was eye-opening to discover the ramifications that fatigue has on businesses and the economy.” 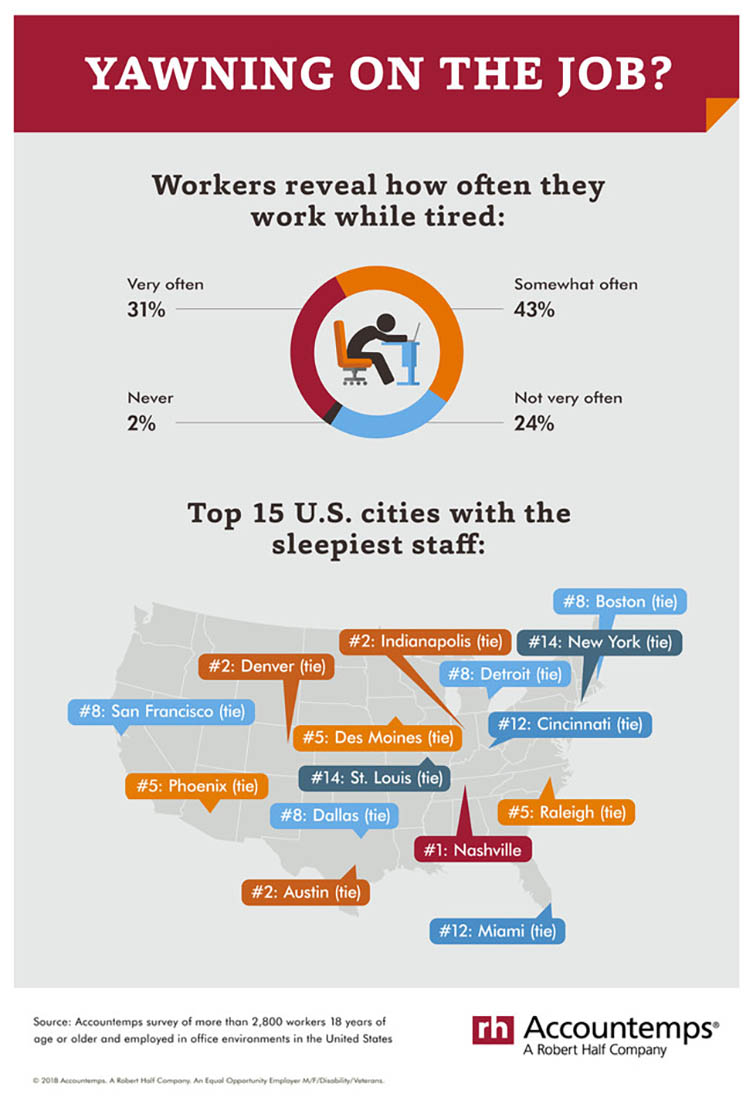 Two cities listed on the survey are also are consistently ranked as some of the best places to live, according to a U.S. News and World Report ranking. In 2018, Austin was listed as the best place to live followed by Colorado Springs, Colo. and Denver.

“The cities at the top of the list are all experiencing tremendous growth with commute times that only seem to intensify as more people move to these areas,” Warren told us. “Employees are coming in earlier and leaving later to handle the high work volume and to avoid peak traffic conditions.”

Katryn Chansley, a marketing executive in Austin, told Mattress Clarity that having worked in Austin and elsewhere, the survey results weren’t tremendously surprising.

“The conflicting priorities of young, motivated working professionals with pressure and opportunity to participate in a vibrant social culture can mean that sleep is perpetually in short supply,” Chansley says.

Warren says the presence of both large and small cities on the list of cities with exhausted workforces also speaks volumes about the work environment in the digital age. “The Internet and its connectivity mean that business can be conducted from nearly anywhere, at any time — making it even more important for people to consciously disengage to maintain a healthy work-life balance,” she told Mattress Clarity.

Warren says it’s also critical for employers to prioritize their team members’ sleep. “Build a relationship with employees that’s based on trust and honesty and work together to minimize or eliminate the contributing factors of exhaustion,” she says. “Employers need to regularly check in with their workers and offer meaningful options like flexible schedules and telecommuting to help maintain work-life balance. Bringing in temporary help during workload spikes can help avoid staff burnout as well.”

Of course, it’s not all up to the boss. Warren says workers can contribute to the cause by openly communicating workload concerns to management, taking (not working through) authorized breaks to clear the mind and recharge, and prioritizing bedtime by turning off electronic devices.

RELATED: What Exactly Is Sleep Hygiene?

The online survey was conducted by an independent research firm for Accountemps. It surveyed more than 2,800 workers who were 18 years of age or older and employed in office environments in 28 major cities across the country.