Home » Blog » What Is Sleep Apnea? – Symptoms, Causes, And My Personal Experience!

Years before I began writing about sleep, I heard about “sleep apnea” a few times. This was usually mentioned in response to my excessive snoring and my habit of choking while I sleep.

I ignored the issue for years and, looking back, my sleep was absolutely terrible. I would wake up as if I hadn’t even gone to sleep. My throat would be dry, and I would be exhausted.

Now, while I was able to receive treatment for this debilitating condition, not everyone is so fortunate. According to the American Sleep Apnea Association, 22 million Americans struggle with the disorder every year. Also, out of this large group, 80% of cases are undiagnosed!

I want to shed some more light on this condition, so let’s talk about what exactly sleep apnea is, the symptoms of sleep apnea, and how one can seek treatment.

There’s no need to suffer through sleep apnea, so read on!

The Different Types Of Sleep Apnea

Simply put, sleep apnea is a condition that causes sleepers to stop breathing in their sleep. During these pauses, most who deal with sleep apnea will wake up briefly. However, in most cases, the sleeper is unaware that they woke up at all. That is why so many people with sleep apnea have no idea that they have the condition!

There are a few different types of sleep apnea. The most common form is Obstructive Sleep Apnea (OSA) which occurs when the muscles toward the back of the throat collapse, narrowing the airway and cutting off the sleeper’s oxygen supply. When this happens, the brain is aware that you aren’t breathing so it will wake you up in order to open the airway. 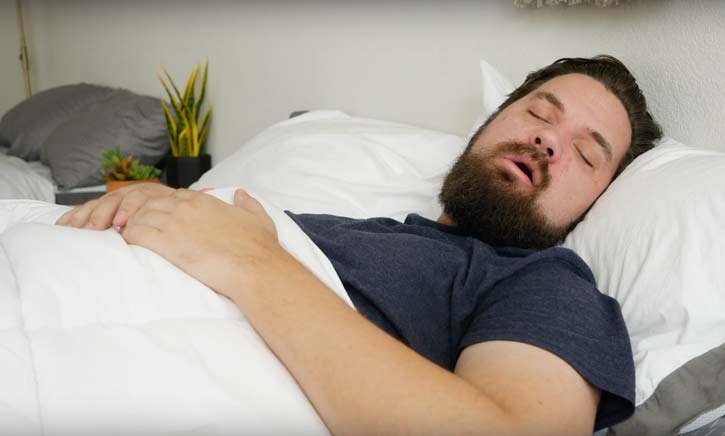 This can happen many times throughout the night and prevent the attainment of deep, restful sleep. Sleep doctors gauge the severity of a patient’s sleep apnea using the AHI (apnea-hypopnea index). A patient with mild OSA will have an AHI between 5 and 15, meaning they wake up that many times per night. Those with moderate sleep apnea will have an AHI somewhere between 15 and 30.

Now, if the AHI is above 30, we are talking about severe sleep apnea. When my doctor tested me for sleep apnea, he found that my AHI was about 47 on average!

Now, as mentioned above, many people who deal with sleep apnea are completely unaware that they have the condition. That being said, there are some symptoms one should be on the lookout for.

This being said, people who sleep alone can still keep an eye out for some other symptoms during the day. For instance, people with sleep apnea will often wake up with dry mouths or a headache. Also, they could find it difficult to pay attention at work or at school. Irritability is also a common sign of sleep apnea. 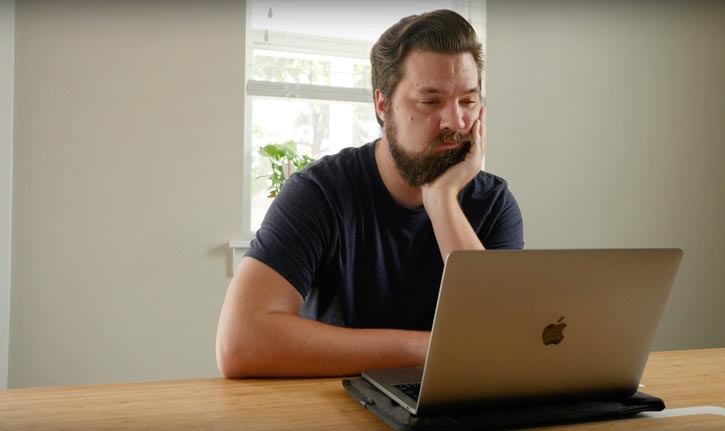 Finally, sleep apnea sufferers will usually be exhausted throughout the day. I speak from experience when I say that I never felt rested or energized during the day.

There are many reasons one may develop sleep apnea. One of the main causes of sleep apnea is basically genetic. Those who are born with a narrower airway are more likely to deal with sleep apnea. They may also have a thicker neck which, in turn, can mean a smaller airway.

Gender also plays a large part as men are three times as likely to have sleep apnea as women. Also, as we get older, our chances of developing sleep apnea do increase. Also, those who deal with allergies, whether seasonal or chronic often experience symptoms of sleep apnea.

Genetics and age are pretty much out of our hands, but there are choices we make that can increase our likelihood of dealing with the condition. For instance, if we are overweight, fat deposits in our necks can further narrow our airway. Smoking can cause inflammation and fluid buildup in our throats and alcohol can relax our throat muscles, causing our airway to collapse during the night.

Side Effects Of Sleep Apnea

Living with sleep apnea be difficult and its negative effects can be seen in the day-to-day and in the long term. Sleep apnea suffers may experience the following side effects during the day:

Those who struggle with sleep apnea for a long time may also see a slew of other negative health outcomes. For example, sleep apnea has been tied to high blood pressure (hypertension) as well as heart attacks and heart disease. Studies have also connected sleep apnea to type 2 diabetes.

However, it is not just the person with sleep apnea who suffers. The snoring, choking, and gagging can also disturb their bed partner. This can lead to relationship problems or at least cause the couple to sleep apart.

The symptoms and effects of sleep apnea can be quite debilitating, but there are solutions. There are now a few treatment options available for sleep apnea patients.

The most common type of treatment is CPAP (Continuous Positive Airway Pressure). A CPAP machine provides a steady amount of air by way of a fitted mask. For most people with sleep apnea, this extra air pressure prevents the muscles at the back of the throat from collapsing. 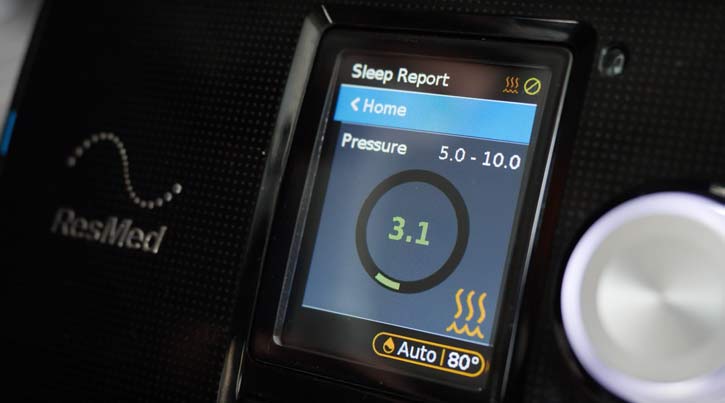 Now, CPAP machines might not work for everyone. For those who don’t find a CPAP helpful or struggle from only mild or moderate OSA may try an oral appliance like a mandibular advancement device (MAD). A MAD is much less obtrusive than a CPAP, and it gently eases the jaw forward, helping to keep the airway from collapsing. A dentist or orthodontist will need to fit the mouthpiece.

Lastly, there are surgical options available. One of the most common forms of sleep apnea surgery is a uvulopalatopharyngoplasty (UPPP). During this treatment, surgeons trim and move the tissues that are found toward the back of the throat in an effort to widen the airway. With a septoplasty or turbinate reduction, surgeons can also make it easier to breathe through the nose.

As I mentioned earlier, obesity has been linked to an increased risk of OSA. Because of this, some doctors might recommend bariatric surgery. Weight loss might make open up the airway further and, coupled with a CPAP, can be an effective treatment for sleep apnea.

My Experience With Treatment

While everyone’s experience is going to be slightly different, I wanted to briefly explain the treatment process. It can be a bit drawn out but, based on the results, I highly recommend seeking treatment for this condition.

To begin, I spoke with my general practitioner about my fatigue and general sleep issues. Based on my symptoms, he sent me to a local sleep doctor who then spoke with me about possible treatment options.

Before any decisions were made, they had to actually test me for sleep apnea. This included polysomnography, an overnight sleep test. During the test, I spent the night in a room similar to one found in a hotel. Well, it was a hotel room with a bunch of technology and cameras. 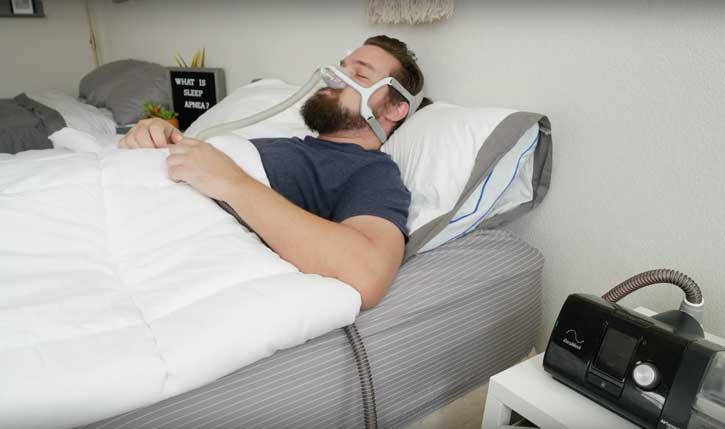 The sleep tech applied nodes to various parts of my body, and then I tried to go to sleep. I can say it is quite difficult to sleep during polysomnography, but I did drift off eventually. In the middle of the night, the sleep tech roused me from sleep to fit a CPAP mask to my face because I had stopped breathing numerous times.

I woke up the next day and ventured to work, and I had to wait a few weeks for the results of my sleep test. When I next spoke to my sleep doctor, he explained that I was indeed struggling with severe OSA. He prescribed a CPAP machine and, after venturing to the Austin medical supplier, I was ready to get better sleep.

I will say that CPAP does feel strange at first. After 35 years of sleeping without a mask, it does take some getting used to! However, after a few nights, putting on the mask was just another part of my bedtime routine.

While it may be difficult to spot sleep apnea symptoms at first, keep an eye out for fatigue and daytime fogginess. Again, if a partner complains about loud snoring, listen to them!

For those who think they may have sleep apnea, don’t wait. Seek treatment immediately.