Shopping for mattresses is so easy. There are no hard decisions to make, and the process is not stressful at all. I personally just close my eyes, throw a dart, and whatever mattress it hits…that’s my mattress for the next ten years.

I am, of course, joking. Mattress shopping is anything but easy, and the choices can be overwhelming. However, a great place to start is by choosing a type of mattress.

Innerspring and memory foam mattresses are pretty much the most popular types of mattresses. To help all of the stressed-out mattress shoppers out there, I wanted to throw these two into a ring and let them duke it out.

So, let the ultimate mattress showdown begin. Cue “Eye Of The Tiger,” and let’s get down to business.

What Is An Innerspring Mattress?

First off, I believe definitions are in order. Most of us know what an innerspring mattress is, but let’s be nice and thorough.

Innerspring mattresses are pretty much the oldest type of mattress in existence and date back to 1871. Jesse James, Theodore Roosevelt, and Steve McQueen all allegedly slept on an innerspring mattress. True, there were sleeping pads available as far back as feudal Japan, but that’s not really what we’re talking about here. 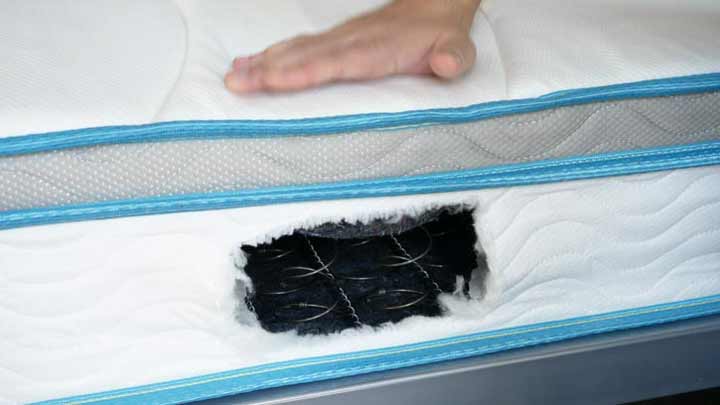 An innerspring mattress contains some sort of coils. There are a few types of coils that I want to mention here:

What Is A Memory Foam Mattress?

Memory foam is a significantly newer mattress material. Charles Yost created memory foam as part of a NASA project back in 1966. Its real name is “viscoelastic polyurethane foam,” but it is commonly referred to as “memory foam.”

It was originally intended to cushion astronauts during the experience of extreme G-force. Since then, it has been used to relieve pressure for millions of Americans. While few of us will know the feeling of shooting out of the stratosphere, we can know the soft feeling of memory foam. 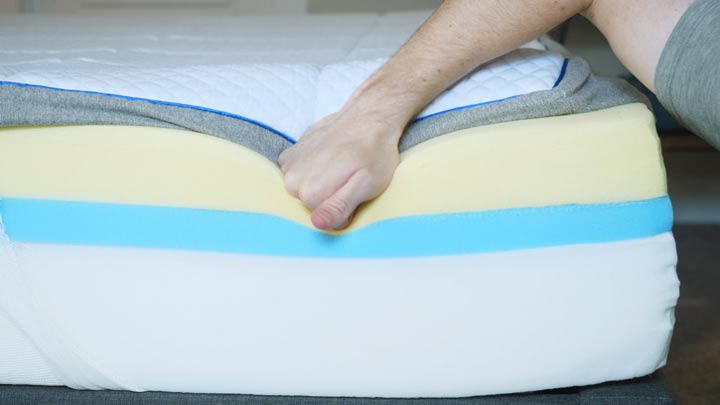 This material is really known for its soft, slow-reacting feel. When a sleeper lies on memory foam, they don’t just drop into the mattress. The material slowly compresses under the sleeper’s body weight.

Now, every memory foam is not exactly the same. Some memory foams are extremely slow-moving, while some react a bit more quickly. Also, depending on the density of the memory foam, a mattress may last for many years or only a few. Simply put, the higher the density, the longer the memory foam will last.

What Are The Main Differences Between Innerspring And Memory Foam Mattresses?

Memory foam, on the other hand, has very little bounce. It is usually very slow to react, and it does allow sleepers to sink into the mattress. It will feel more like sleeping “in” the mattress. 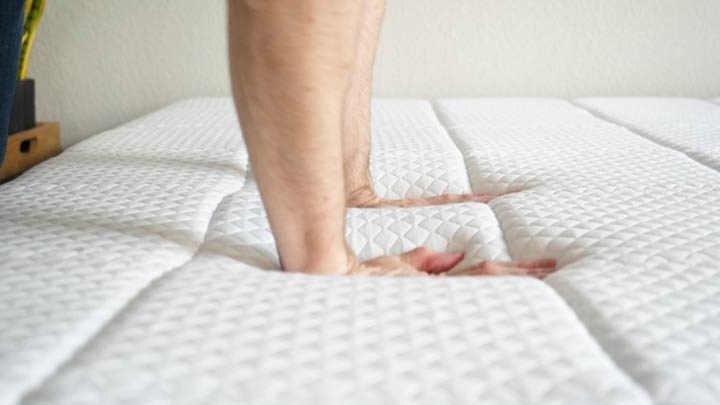 Sleeping on an innerspring mattress, it should feel much more easy to move around and change positions at night. Sleeping on a memory foam mattresses, it is easier to feel trapped by the mattress.

Finally, an innerspring mattress is generally going to be more breathable than a memory foam mattress. The main reason for this is that coils leave so much room for air to flow through. With an all-foam mattress, there is usually little to no room for air to pass.

The Benefits And Drawbacks Of Innerspring Mattresses

So, both types of mattresses have their benefits, and they have their drawbacks. Starting with innerspring mattresses, there really are helpful in a couple of ways. 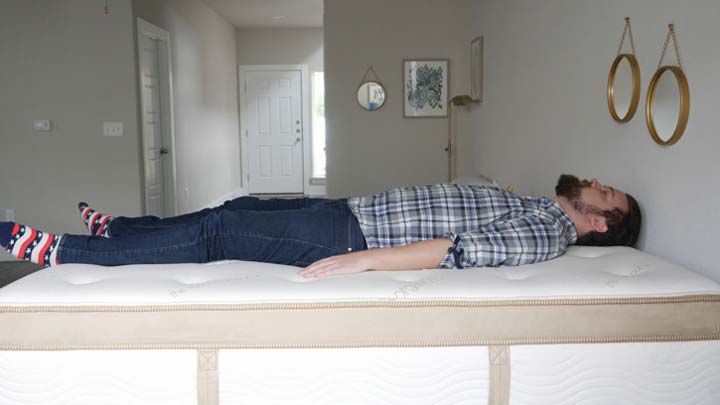 At the same time, innerspring mattresses are not the best with motion isolation. Those who sleep with a partner might feel their nocturnal movements transfer to their side of the bed. It doesn’t help that innerspring mattresses can be noisier, especially when they have been in use for a good deal of time. The squeaks and groans can also be very disturbing at night.

Finally, innerspring mattresses don’t always feature the best pressure relief. Their comfort layers are rarely very thick, so side sleepers can expect to feel some pressure on their shoulders and hips.

The Benefits And Drawbacks Of Memory Foam Mattresses

Memory foam also provides fantastic contouring. Sinking into a memory foam mattress, sleepers will feel the material take the shape of their body, again creating a nice hug around the body.

For those couples out there, memory foam also isolates motion quite well. Each partner’s movements should be isolated to their side of the mattress. Also, memory foam mattresses rarely make noise. Even going to the bathroom three times a night shouldn’t disturb one’s partner.

So, the major drawback of memory foam has to do with temperature regulation. Speaking plainly, memory foam can sleep hot. The material actually traps body heat and creates a hotter sleeping surface. It can direct this body heat back at sleepers, causing their temperature to rise throughout the night.

That being said, not all memory foam mattresses are necessarily going to sleep hot. Many companies employ some kind of cooling infusion, like gel, graphite, or copper, to assist with heat dissipation. Mattress shoppers should keep an eye out for these infusions if they are considering memory foam. 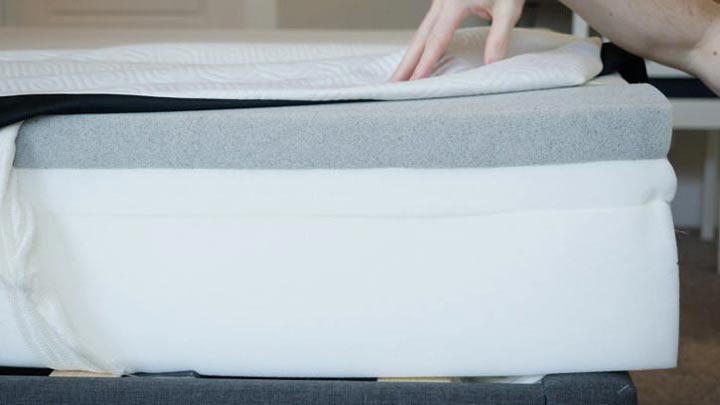 Finally, memory foam can sag. This is not true of all memory foam mattresses, but those that feature a low-density memory foam can start to show body indentations. When this happens, the mattress no longer offers the proper amount of comfort and support.

Who Should Get An Innerspring Mattress? 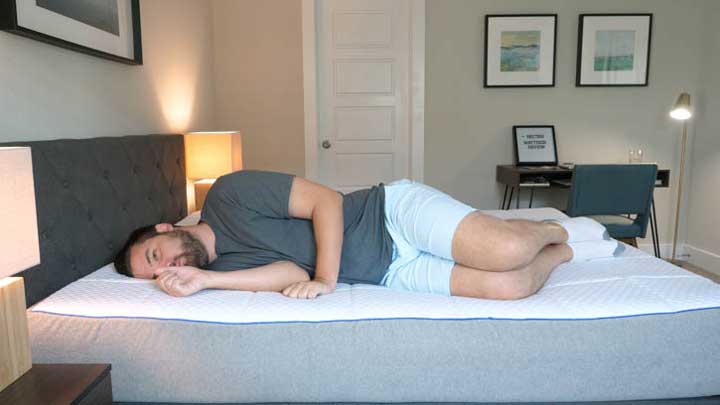 Who Should Get A Memory Foam Mattress?

Okay, the battle is over. At this point, it should be much easier to choose between memory foam and innerspring mattresses. I get it, there are a lot of things to consider. However, keeping this info in mind can make mattress buying much less daunting.

If anyone has questions or needs a personal recommendation, please leave a comment below!