According to the safety regulations from the U.S. Consumer Product Safety Commission (CPSC) first issued in 2007, it is a requirement for all mattresses to contain flame retardants so that each mattress can withstand exposure to an open flame for a sustained period of time.

These guidelines were issued to create safer products that can withstand fire for longer periods of time so in the case of an incident with something like a candle or a cigarette, you have time to safely exit your home and/or extinguish the fire.

Anytime you introduce chemicals to common household products, the public grows concerned, so it’s no surprise that there has been a lot of controversy over whether flame retardant mattresses are safe or not.

We’re here to put your mind at ease and explain everything you should know about flame retardants in mattresses, including how to choose a flame retardant mattress that is safe.

What Are Flame Retardant Chemicals?

“Flame retardant” is a term that you will see a lot while you are shopping for a mattress. It refers to a layer of chemicals or natural materials that are used to ensure that the mattress meets flammability standards.

According to the National Institute of Environmental Health Sciences (NIEHS), flame retardant chemicals are applied to common materials like furniture, electronics, building and construction materials, and transportation products, to prevent the start or slow the growth of a fire.

According to the NIEHS, flame retardant chemicals have clear benefits to consumer safety when they are added to common household items. However, the NIEHS also acknowledges that there is continued evidence that flame retardants could potentially have dangerous effects to humans and animals.

These harmful effects may include damage to the immune system, disruption to the endocrine and thyroid functions, reproductive toxicity, impaired and neurological function, and cancer.

Do All Mattresses Contain Flame Retardants?

Unfortunately, the traditional flame retardant chemicals that are commonly used are very toxic, which is bad news for you and the environment. The good news is, there are flame retardants that are safer than others. 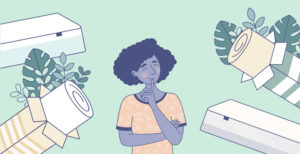 The first thing that you need to know is that it is not illegal for a mattress to not have a chemical-laden flame retardant. Some salespeople may tell you that this is a requirement in order to push a mattress, but it’s not. For instance, some certified organic mattresses opt to use wool as a flame retardant as wool is a safe, natural flame retardant option.

Even though there are safe flame retardant options out there, some manufacturers opt to use more readily available flame retardant chemicals that are more convenient, cheap, and (unfortunately) toxic.

We’ll help you understand the flame retardant chemicals that can be present in a mattress and which are the most safe so you can sleep soundly on a flame retardant mattress.

We’ll explain a little more about each of these chemicals that you should avoid in a mattress.

Polybrominated diphenyl ethers, known commonly as PBDEs, were some of the earliest flame retardants used commonly in mattresses and other furniture items. These chemicals used to be included in the foam portions of a mattress, and they can be extremely dangerous.

PBDEs can be dissolved into other materials, including your body. Once these PBDEs make their way into the body, they don’t go away. These toxic chemicals can stay in your tissues and build up for your lifetime, causing various detrimental health effects.

In 2005, PBDEs were banned in the U.S., so these chemicals should be contained in any newly constructed mattresses in the U.S.. However, if you are buying a used mattress or an old mattress through some other source, you should be very cautious and do your research to learn if it contains PBDEs.

This is also why it’s a good idea to buy a U.S. made mattress instead of one that is made from another country. This way, you know your mattress was made under these manufacturing guidelines to prohibit PBDEs.

This is a water soluble chemical, which means that it can easily absorb into your skin while you are sleeping. Considering boric acid is primarily used as a roach killer. It is probably not something you want to be sleeping on all night. The Agency for Toxic Substances and Disease Registry states that the minimal lethal dose is only 2 grams in children and 15 grams in adults.

Although not as water soluble as boric acid, wetting can still cause this chemical to rise to the surface of the mattress. It is also able to become airborne with mattress use. It is labeled toxic by the Environmental Protection Agency (EPA).

Inhalation of antimony trioxide is associated with chronic intestinal inflammation, pulmonary toxicity, respiratory irritation, and pneumoconiosis. It is believed to be carcinogenic and exposure to high levels can lead to Adam-Stokes syndrome.

Generally referred to as Deca, this fire retardant is very similar to the banned PDBE that was previously mentioned. It is also not as water soluble as boric acid, but sweat, saliva, urine, and water spills will wick it to the surface.

When exposure was tested in birds, cows, fish, and rats, metabolic debromination occurred. It has been found in breast milk, blood samples, and waste water. In humans, studies show it is associated with liver tumors, decreased thyroid functions, reproduction and developmental problems, and neurological effects.

Deca is banned in Maine and Washington, and there are restrictions in a few additional states, including Illinois, California, Oregon, Hawaii, Massachusetts, Connecticut, and Montana.

If the word “melamine” looks really familiar to you for some reason perhaps you remember the pet food scandal when dogs were dying in the United States after eating pet food made in China that was tainted with it.

Melamine is extremely water soluble. It can be brought to the surface of the mattress very easily and absorbed by the skin. The United States Food and Drug Administration found that when absorbed into the bloodstream it interacts with urine-filled renal tubules, causing them to crystalize, damage cells, and cause kidney malfunction. It can also lead to reproductive damage and bladder cancer.

This is a less common fire retardant used on mattresses and can also be brought to the surface through wetting. Adverse effects of extended exposure are primarily related to the central nervous system, and include symptoms of convulsions, sedation, inebriation, spasms, and unconsciousness. The National Institute for Occupational Safety and Health has also declared it a potential carcinogen.

As we mentioned earlier, each mattress is required to contain flame retardants in order to pass flammability tests for safety, but that doesn’t mean these flame retardants have to be chemicals that could be toxic.

Many mattress manufacturers select to use natural and safe alternatives like wool, latex, and rayon. These materials are natural flame retardants that are safer options.

Wool is being used in abundance for this purpose now because its innate properties are naturally fire retardant. Wool can hold as much as 30 percent of its total weight in moisture, which means that a significantly higher temperature is required to ignite. It burns very slowly, smoldering and charring. This gives off minimal heat.

Wool’s structure is very unique. Microscopic scales that look a lot like pinecones cover every fiber. These scales rub against one another and get tangled. This ultimately holds the wood together and this unique composition is what makes it so resistant to burning.

Since fibers are crammed together and entwined an environment is created with very little oxygen. Wool is a breathable fabric, which keeps you cooler when you sleep. However, it does offer a firmer sleeping surface than what you may be used to, so just keep that in mind.

Latex is another popular option. Natural latex mattresses are created from the sap of a rubber tree. Don’t assume that just because a mattress is latex that it is free of fire retardants. There are synthetic latex mattresses available, as well as blends, so it is important that you fully read the label of the exact mattress you intend on buying.

Inherent rayon is a fiber that is also becoming increasingly popular because it can pass flammability tests successfully and it has a low cost to manufacture. High quality wool on average costs $15 per linear yard, but inherent rayon costs about $2 for the same amount.

It should be noted that inherent rayon is not 100 percent natural like some will have you believe. Chemically altered purified cellulose is involved in the production process. Rayon is essentially regenerated cellulose fiber that has been bonded to silica. So, it is not entirely eco-friendly or natural, but it is free of carcinogenic chemicals.

As the mattress industry constantly evolves and becomes more sophisticated one can only expect the future to bring even more options.

If you look back to a decade ago, you see how far the industry has already come. Years ago, nearly everyone purchased mattresses saturated in toxic chemicals, but today consumers demand safe alternatives, and there are already an abundance of options in a variety of styles and price ranges to accommodate anyone’s budget and preference.

To choose a safe flame retardant mattress, be sure to stay away from mattresses made with toxic chemicals like PBDEs and instead search for certified mattresses that use materials like wool and rayon.