If you drive a car, this scenario will probably sound familiar:

It’s nighttime and you’re driving home. It’s been a long day, and you start to nod off. Every now and then, the wheel begins to turn off course. You correct it and keep motoring on — maybe stop at a gas station for a Red Bull. But you can’t drink enough caffeine to keep yourself fully alert. You turn up the music to try to keep your mind occupied. You tell yourself, “I’m almost home. Just a few minutes left.”

But it only takes seconds to cause a major accident. Many of us are aware of the dangers of drunk driving, but “driving while sleepy” can be just as fatal. In 2016, drowsiness was the cause of nearly 10 percent of all car crashes. It’s also responsible for over 800 deaths a year.

Drowsy driving is such a serious issue that many car manufacturers are developing technologies to help prevent these sorts of accidents from happening. Companies such as Audi, Mercedes, and Volvo already offer drowsiness detection systems that alert drivers when they are falling asleep. If the car senses abnormal steering wheel activity or sudden lane deviation, it will flash a coffee cup icon on the dashboard and set off a sound alarm.

Developers are also testing more advanced devices to keep drivers safe. Imagine: One day we could have cars that will switch to autopilot when we’re not awake enough to be behind the wheel.

These advancements are promising, but right now many of us don’t have the fancy tech in our cars. That means it’s important to know how to prevent drowsiness from occurring and what to do when we are feeling a little sleepy as we drive.

Here’s everything you need to know about drowsy driving so you can keep yourself (and everyone else) safe on the road.

What Is Drowsy Driving?

Drowsy driving isn’t just about falling asleep at the wheel.

According to the Centers for Disease Control and Prevention (CDC), drowsy driving is the “dangerous combination of driving and sleepiness or fatigue.” When drowsiness seeps into our consciousness, it can have the same effects that alcohol has on our brains. Drowsiness can:

The data shows the effects of these cognitive changes can be deadly.

The National Highway Traffic Safety Administration (NHTSA) reported that drowsy driving killed 824 people in 2015, the last year such data was published. The NHTSA also estimated that drowsiness caused 72,000 crashes and 44,000 injuries in 2013, but it’s unclear how accurate those estimates are. In February, the AAA Foundation for Traffic Safety released a study that concluded drowsy drivers could be causing up to eight times as many accidents as originally believed.

It’s tough to accurately estimate the toll of drowsy driving, particularly when alcohol, drugs, or pre-existing medical conditions are involved. It’s easy to write someone off for drunk driving because investigators can use breathalyzers. Conditions such as narcolepsy and other sleep disorders can be diagnosed by doctors. On the other hand, there are no tests for sleepiness. Most cases of drowsy driving are self-reported, which is not the most reliable method of collecting information. Not everyone is willing to admit they were sleepy, and some people have trouble knowing if they were fatigued in the first place.

Even though drowsy driving can be difficult to measure, there are some clear warning signs that show a driver is not alert enough to be on the road.

Here are some red flags to look out for if you or someone you know is behind the wheel: 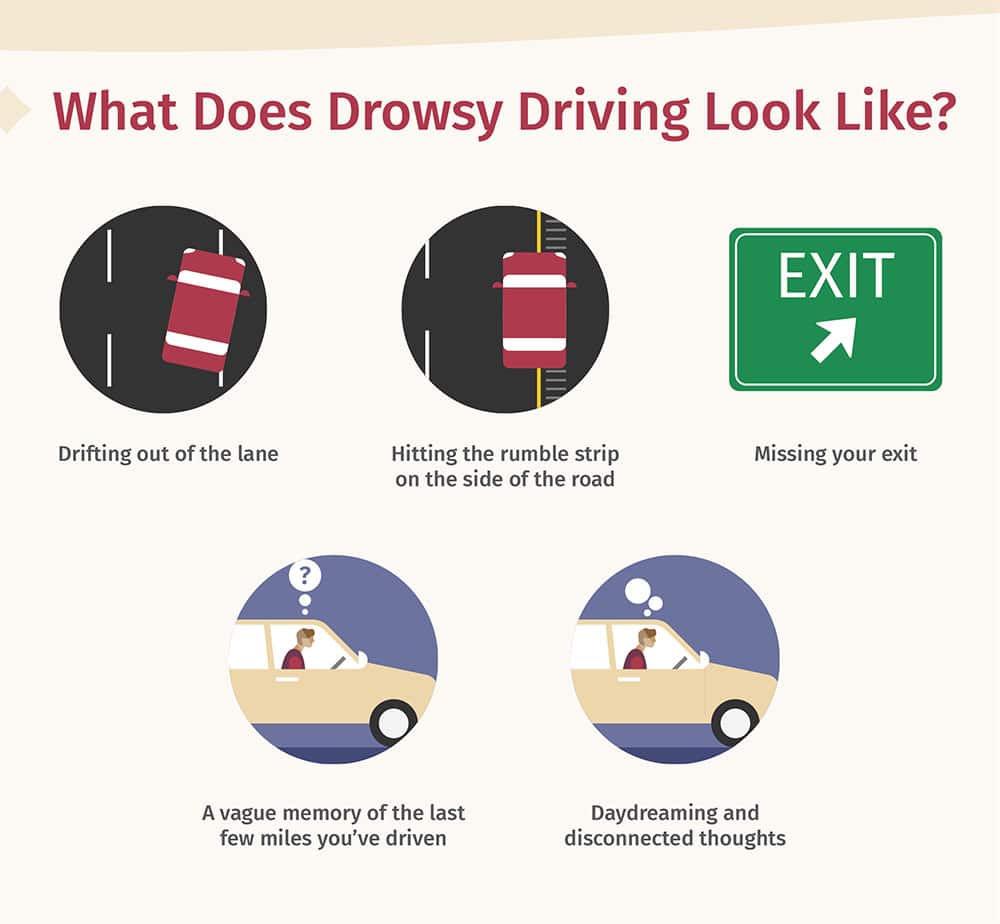 It’s also important to identify situations where a driver (whether it’s you or a friend) has the potential to become a drowsy driver before anyone even turns on the ignition. Here are some classic situations in which drowsy driving is likely to occur:

If you ever find yourself in any of these situations before you step behind the wheel, it’s probably best that you let someone else take over for you or find some other way to avoid driving. That way, you and any fellow passengers can stay out of danger and keep the streets as safe as possible.

Who Is Most Likely To Drive Drowsy? 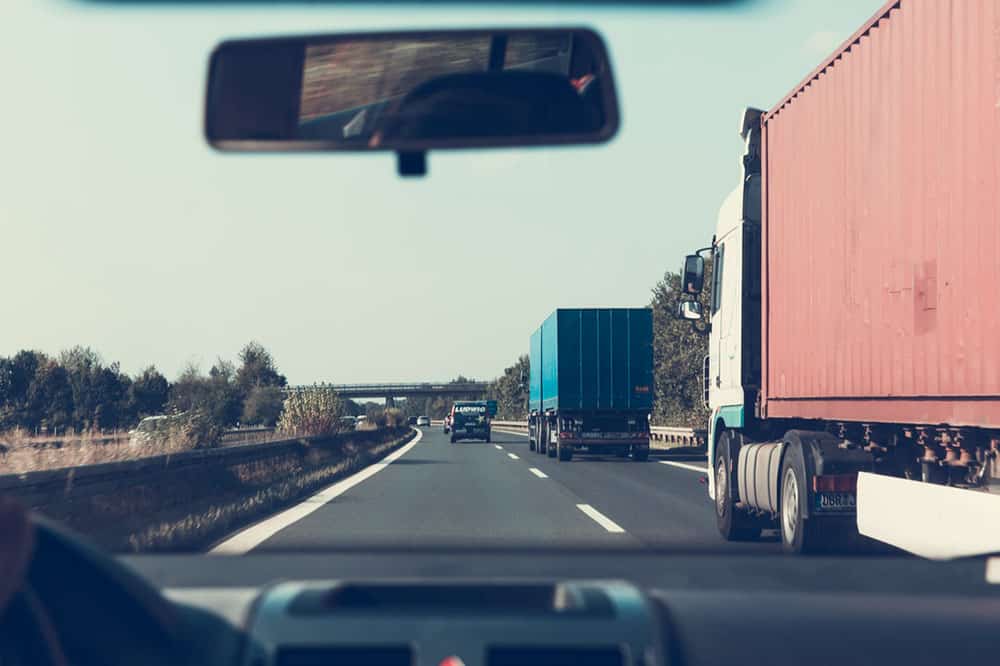 While everyone has the capacity to doze off on the road, certain lifestyle factors and medical conditions can have a huge impact on a person’s alertness and increase their risk of driving while drowsy. These risk factors include:

Again: Anyone can be guilty of drowsy driving, but if you fit into one of these demographics, it’s important to be aware of the increased risks. Awareness is the first step to making healthier decisions behind the wheel.

If you ever catch yourself feeling a bit groggy at the wheel, you might feel tempted to keep going and just rest when you get to your destination. But be aware that you are taking on immense risks when you’re not driving at 100 percent. 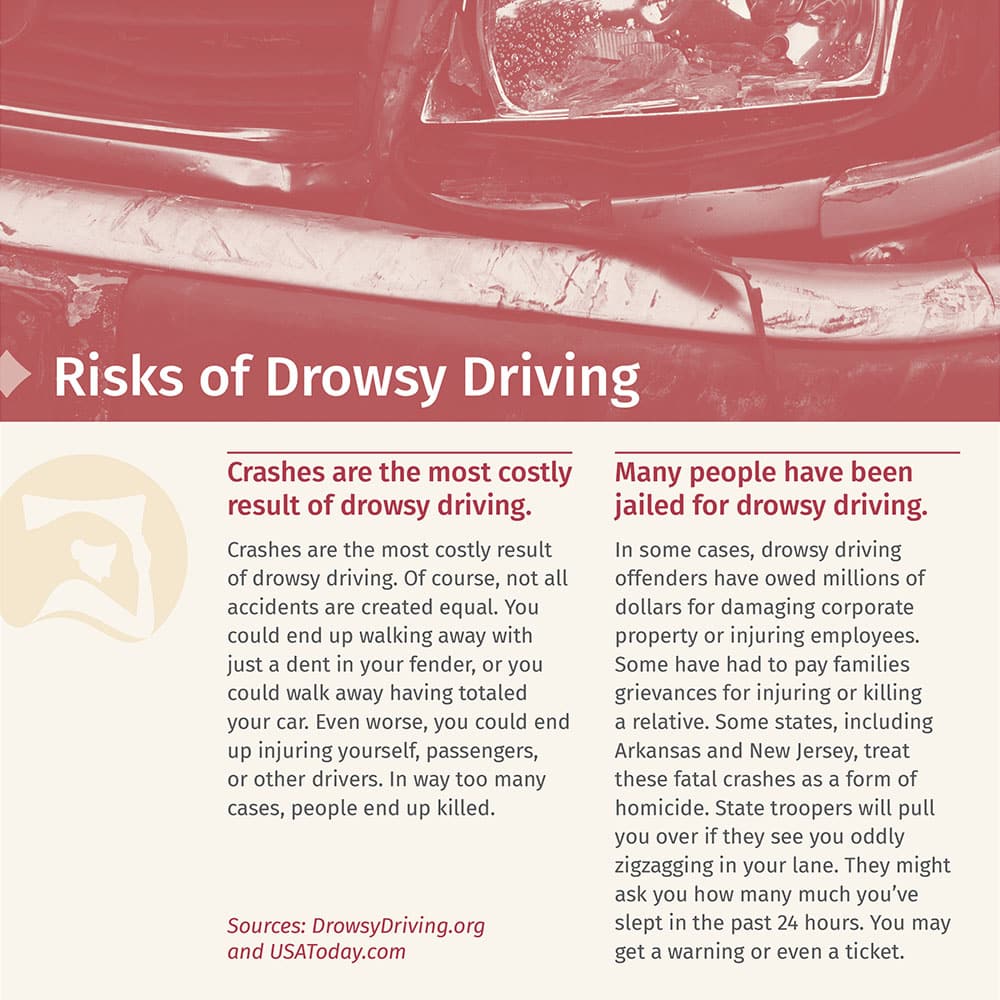 Bottom line? Drowsy driving has some scary consequences. This helps explain why state governments are doing their best to prevent these accidents from happening. Some highway administrations have installed signs saying, “Driving drowsy causes crashes” or “Drowsy? Crash on a Couch Not a Road”. Governments have also invested in building more rest stop areas.

But despite all the measures that are being taken, state officials have found it very difficult to really crack down on “snoozing and cruising” at large.

Very few police officers are formally trained to detect a fatigued driver. There’s no device that can measure sleepiness like a breathalyzer can analyze someone’s drunkenness. And oftentimes when someone hears the cop siren and sees those flashing lights, the adrenaline kicks in and reawakens the person before the police arrive at their car door.

In order for someone to prosecute or make a case against a drowsy driver, the driver has to be willing to admit that they were tired. Not everyone can or will give this information, especially if it means they’ll be in more trouble than they were to begin with.

How Does Drowsy Driving Compare To Drunk Driving?

What is Drunk Driving?

Drunk driving occurs when someone makes the choice to get behind the wheel after consuming enough alcohol to impair their ability to safely operate a vehicle or consume more than the legal limit of alcohol.

According to the NHTSA, your alcohol level is measured by the weight of alcohol in a specific volume of blood, also referred to a Blood Alcohol Content or BAC. A BAC level of .08 grams of alcohol per deciliter of blood is considered enough to increase the risk of crashing your vehicle. It is illegal in all 50 states (D.C. and Puerto Rico as well) to drive with a BAC of .08 or higher.

Here are some of the effects of a blood alcohol level is at .08 or higher (from the NHTSA)

How Are Drowsy Driving and Drunk Driving Similar?

The impacts of drowsy driving are often compared to drunk driving by researchers.

“Drunk driving and drowsy driving have several similarities, writes the American Sleep Association (ASA). “They both result in impaired attention, judgment, mental processing, and slower reflexes. They are both equally dangerous and double the risk of an accident.”

According to a 2018 study published in the journal Sleep, compared to drivers who slept 7 hours in a 24- hour period, drivers who got less than 4 hours of sleep were three times more likely to be involved in an accident. This is the same crash risk as a drunk driver with a 0.08 alcohol concentration.

How To Prevent Drowsy Driving 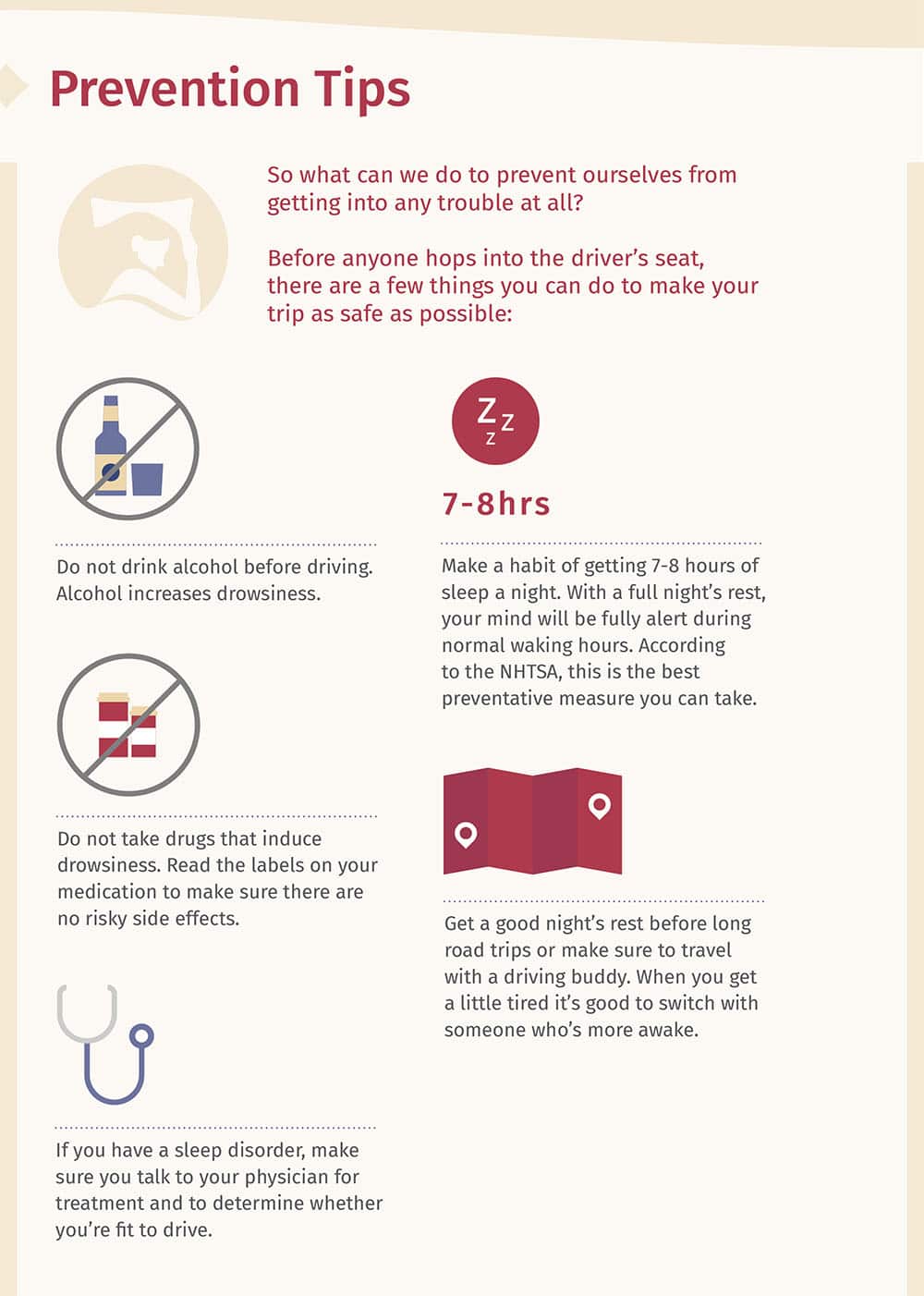 While the preceding precautionary tips will put you in the best position to drive safely, there’s a chance you could still get a little groggy on the road. If you ever catch yourself drowsy driving, consider taking one or several of the following precautions:

If you’re ever out on the road and you suspect someone else is drowsy driving, there are a few things you can do to (hopefully!) prevent a serious accident from happening:

Remember: There’s only so much you can do to keep you or anyone else awake while they are driving. If you find yourself feeling sleepy behind the wheel, don’t push through. Get a hotel room and sleep on a nice mattress and pillow instead. And if you see another driver dozing off on the road, pull over and call for help.

How Teenagers And Young Adults Can Avoid Drowsy Driving

As noted above, teenagers and young adults may be particularly susceptible to drowsy driving for a number of reasons: They have higher sleep needs but are often running a sleep deficit, and they have less experience behind the wheel. According to the National Safety Council, here are some tips that can help teenagers and young adults limit their risk of driving while drowsy: 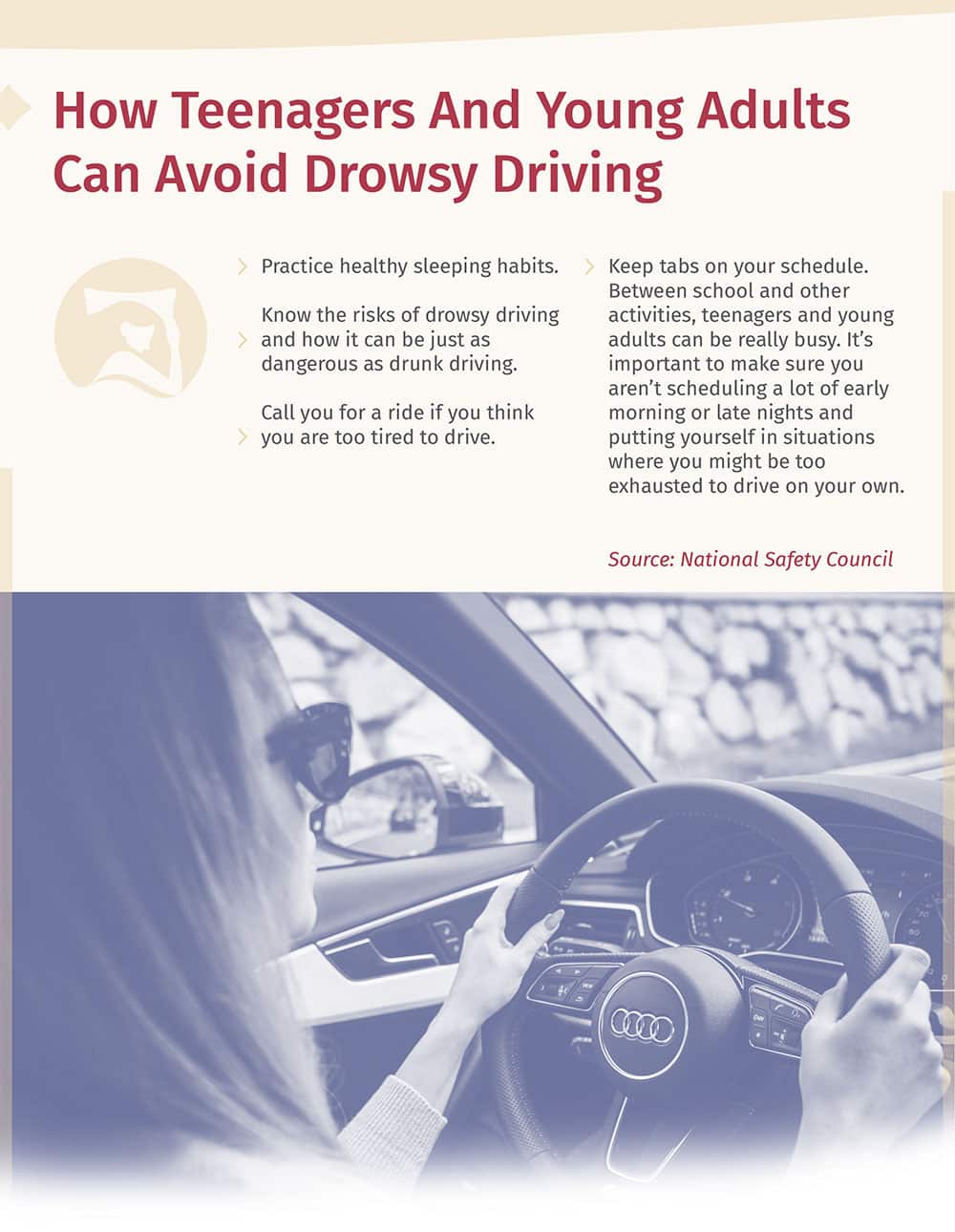 For more information on drowsy driving and how to prevent it, check out these links:

For even more resources, go to drowsydriving.org or the NHTSA’s drowsy driving homepage.

Drowsy driving is a serious problem in the U.S., and it needs to be treated as such. In American culture, it’s so easy for us to fall into our normal habits of working through fatigue and lack of sleep, but that mindset is dangerous once we get behind the wheel — if not fatal. It’s killed hundreds and injured thousands of people every single year.

Driving while sleepy is just like driving while intoxicated. Fatigue impairs your concentration, reaction time, and judgement, causing you to do all sorts of crazy things on the road: drifting, swerving, sudden speed changes, missing exits … you name it. Reckless driving can get you in a devastating accident, which can put you in jail or serious debt. So if you’re feeling the slightest bit tired ahead of your trip, make sure you are taking the proper precautions before you put the keys into the ignition.

While car companies are doing their best to come up with technologies that keep us from driving drowsy, it’s still up to us to make sure we are fit enough to be on the road. Remember, if you ever feel your eyes start to droop on the ride: Stop, pull over, and get some shuteye. You (and everyone else on the road) will be safer for it.