Air mattresses don’t always bring the best memories to mind – I remember blowing them up by the side of a campfire, lungs tired and nerves frayed, or waking up on the rocky ground after the mattress had completely deflated.

That’s why I was so interested in the AeroBed Air Mattress with Built-in Pump and Headboard – it looks more like an actual mattress one would put in a guestroom and less like those products that have caused me such pain while camping or sleeping at a friend’s house in middle school.

The AeroBed is one of the most deluxe air mattresses I have come across and features a pump system that maintains one of three firmness settings for the entire night – it also has a headboard!

Those who are looking for a luxury air mattress because I’m about to dive into my in-depth AeroBed air mattress review!

The AeroBed features three firmness settings and a very luxurious design - click the button for the best deal on AeroBed. 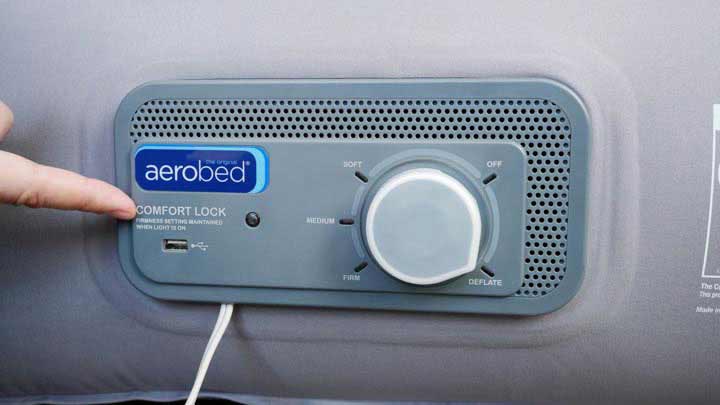 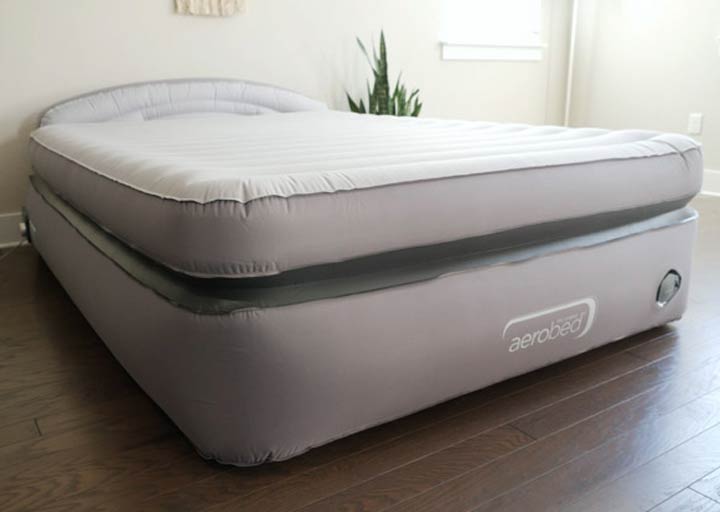 First off, the AeroBed comes in three sizes: Twin, Full, and Queen. Whatever size one chooses, the AeroBed will be 20-inches tall – this is taller than a lot of air mattresses, and this comes from the two layers. The AeroBed almost looks like a standard mattress, with a big base and a comfort layer atop that.

There are a few features that really make the AeroBed stand out. First off, it features a built-in pump with three firmness settings – simply plug the mattress into the wall, dial to the desired setting, and the mattress will inflate. There is also a deflate setting that will pump air out of the mattress so people don’t have to awkwardly push air out.

There is also a Secondary Comfort Lock, a second pump that pumps air into the mattress while one sleeps – it gauges the firmness of the AeroBed and, if any air has come out, it will rectify the situation. This pump is more silent than the main inflation pump and shouldn’t wake up sleepers during the night – just make sure to leave the mattress plugged in overnight. 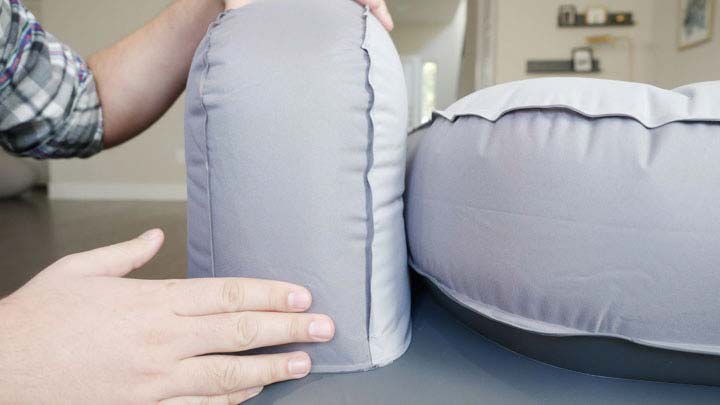 The headboard is also a fantastic feature – it extends a few inches past the mattress and gives the AeroBed more of a “real” bed look. It should also ensure that the pillows don’t fall off the top of the mattress.

Last but not least, there’s even a USB port built into the pump area! If the mattress is plugged in, sleepers can plug a USB cord right into the AeroBed and charge their phones or tablets.

The AeroBed features three firmness settings and a very luxurious design - click the button for the best deal on AeroBed.

When I’m reviewing an air mattress I first look at how it inflates and how long it takes to inflate – as I said above, this is my least favorite thing about air mattresses. However, the AeroBed’s built-in pump gives the whole thing a very “set it and forget it” feel to it – I plug in the air mattress, set the dial to Firm and press the button. Starting with the AeroBed completely flat, it takes about two minutes for it to fully inflate. 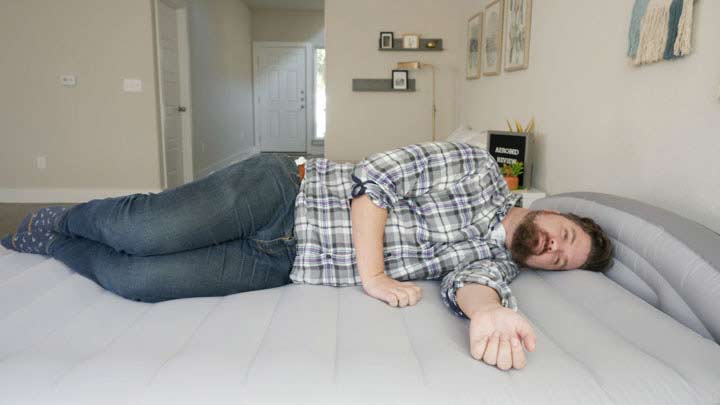 In general, the AeroBed is a comfortable air mattress – of course, it is not like a memory foam mattress, but I am surprised by how well I slept on the AeroBed.

Waking up in the morning, I was also surprised that the AeroBed was just as firm as when I went to bed. The Secondary Comfort Lock definitely does its job, but it does make a bit of noise that might disturb some people during the night.

Deflating the AeroBed was no real chore and, using the Deflate setting, the mattress was mostly deflated in about two-and-a-half minutes. It was necessary to press on the AeroBed to get some excess air out, however.

The AeroBed is a luxurious air mattress that could be a fantastic option for those who want firmness options and something that won’t deflate overnight. However, just keep the price in mind as this is currently $350 for a Queen-size.

What is the warranty on an AeroBed?

According to the company, the AeroBed does come with a limited warranty that covers defects and any faulty workmanship.

Does an AeroBed need to stay plugged in.

In order for the AeroBed to stay properly inflated during the night, it does need to stay plugged in all night. However, it is a good idea to unplug the AeroBed when it is not in use.

What is an AeroBed made out of?

The AeroBed is made out of laminated PVC, a durable type of vinyl that is designed to prevent tearing and punctures.

How much weight can an AeroBed hold?

It does depend on the model, but the Queen-size AeroBed with Built-In Pump can hold up to 600 lbs.