Those feeling unwell after a night of bad sleep may need more than just some extra shut-eye. It might be time to reach for a glass of water and drink up, say experts.

Researchers from Penn State University found that adults who sleep only six hours per night — as compared to eight hours — are more likely to be dehydrated.

We spoke with the study’s lead author, Assistant Professor of Biobehavioral Health at Penn State University Asher Rosinger, to learn more about the study and its takeaways.

More than 20,000 Chinese and American adults were studied in three samples. Two of the samples came from the National Health and Nutrition Examination Survey, and one was analyzed from the Chinese Kailuan Study.

The group who slept six hours also had more concentrated urine than those who got more sleep.

“The biggest takeaway for me was the consistent results between U.S. and Chinese adults in the relationship between typical night-time sleep and higher odds of dehydration, particularly in comparing those who slept six versus eight hours,” Rosinger told Mattress Clarity.

How Our Bodies Regulate Hydration

To regulate the status of our hydration, our bodies release a hormone called vasopressin, according to a release from Penn State. The hormone is released both during the day and at night while we sleep.

“Vasopressin is released both more quickly and later on in the sleep cycle,” Rosinger said in the release. “So, if you’re waking up earlier, you might miss that window in which more of the hormone is released, causing a disruption in the body’s hydration.”

When it comes to drinking more water, Rosinger tells us there are several factors involved.

“People’s water needs vary depending on many things, including their body size, physical activity level, the temperature, and then if a woman is pregnant or lactating” he says. 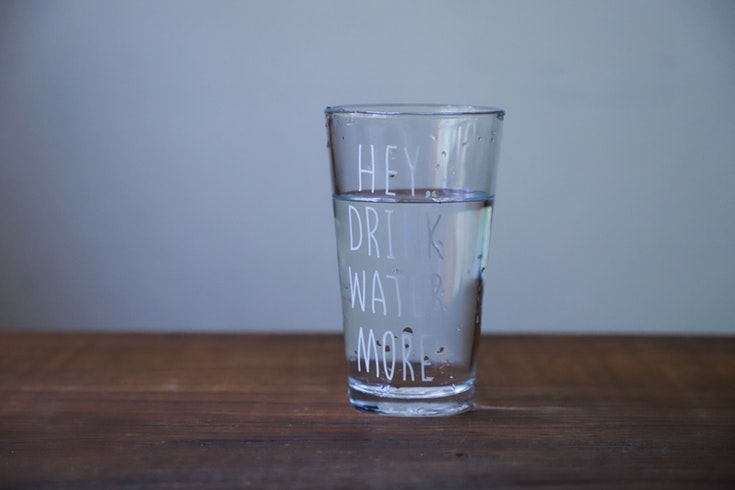 Rosinger says that, generally speaking, drinking around 2.7 liters for women and 3.7 liters for men will meet the majority of people’s water needs. That water can come from many places, including foods (such as water-rich fruits) and other beverages including teas.

“If a person is not sleeping eight hours a day, I would recommend looking at the color of pee to see whether it is light yellow or dark yellow,” Rosinger told Mattress Clarity. “If it’s dark yellow and they regularly have headaches and fatigue, increasing their plain water intake by a glass or two above what they are currently drinking may help.”

The Relationship Between Sleep and Hydration

The connection between poor sleep and dehydration is not surprising, says Dr. Michael Grandner, director of the Sleep and Health Research Program and an assistant professor in the Department of Psychiatry in the University of Arizona College of Medicine.

“…Sleep is related to so many aspects of health in terms of basic physiology and also health behavior,” Grandner told Mattress Clarity. “Hydration is another element of health that has both physiologic and behavioral components. It’s not surprising that it overlaps with sleep health.”

Grandner says the study results won’t impact his clinical practice and that he would want to see some causal data first.

The study was published in the journal SLEEP on Nov. 5.