A new type of sleep tracker may be hitting the market soon. But people don’t wear this tracker on their wrists or place it on their bedside tables. Instead, individuals wear this sleep tracker like they would a pair of pajamas.

Researchers at the University of Massachusetts, Amherst recently unveiled the “Phyjama,” smart pajamas outfitted with sensors to measure heart rate, breathing, and other biometrics. Trisha L. Andrew, Ph.D., assistant professor in chemistry at UMassAmherst, and her team presented their design at the American Chemical Society Spring 2019 National Meeting & Exposition.

The Design Of The Smart Pajamas

At first, the Phyjama set looks like a standard pajama shirt. But inside, the shirt contains five sensors located within the fabric that are designed to measure heart rate, respiration rate, and sleep position.

The sensors are both triboelectric and piezoelectric, according to a release from the American Chemical Society. Here’s what that means in layperson’s terms: The Phyjama’s one triboelectric sensor monitors for quick pressure changes and can detect the wearer’s heart rate. The four piezoelectric sensors monitor constant pressure and can determine the wearer’s sleeping position. 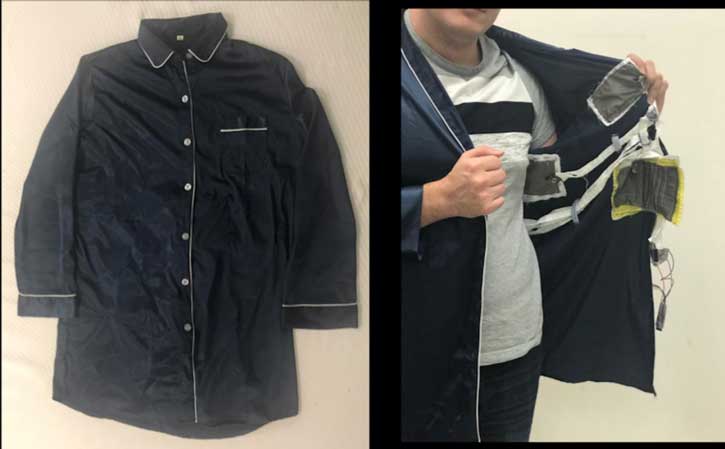 Using a process called “reactive vapor deposition,” the researchers say they are able to coat the sensors directly on fabric patches for a flush design. These fabric patches are then connected by silver-plated nylon threads and run into a printed circuit board. The gathered data is sent out via Bluetooth.

Andrew explained that making the sensor array unobtrusive was key. “Our team is interested in broadly tracking human behavior using garments that are imperceptibly decorated with sensors,” Andrew told us via email. “We want to create smart garments that are loose-fitting, comfortable to wear, and customizable.”

The Potential Benefits Of The Phyjama

Andrew said research into Sudden Infant Death Syndrome (SIDS) helped her team realize how important it was to monitor for sleeping position. According to the American Academy of Pediatrics, more than 3,500 infants die per year in connection to SIDS. The organization recommends that, until their first birthday, infants sleep only on their back.

“We started thinking about sleep posture partly because of Sudden Infant Death Syndrome, where the colloquial knowledge is that you place infants to sleep ‘face up to wake up,’” she said.

“The obvious next question for us was, ‘how do you know if the infant is always sleeping face up, other than physically watching them at all times?’…We realized that there is no known technology, other than visual systems like cameras and expensive motion capture facilities (which are also basically rooms outfitted with cameras in the walls), to monitor sleep posture.”

In addition to sleep position monitoring capabilities, Andrew told us that she and her team plan to add another patch to the pajama pants. This will be meant to measure back strain.