Those lucky enough to be in Luxembourg this weekend will have the chance participate in a public pillow fight in the heart of the city, all in the name of Parkinson’s awareness.

The pillow fight event is set for September 2 at the Rue du Marché-aux-Herbes. It is open to the general public (all ages) and was created to support patients in their fight against Parkinson’s Disease, according to information from the Visit Luxembourg site.

The event is hosted the National Centre for Excellence in Research on Parkinson’s Disease (NCER-PD), the Luxembourg Centre for Systems Biomedicine (LCSB) and the Rotary Foundation.

According to NCER-PD, there will be several information booths at the event to raise awareness on the Parkinson’s disease. There will also be music and entertainment, as well as drinks and a barbecue, with all proceeds going to the NCER-PD.

In addition to the pillow fight, slices of a Luxembourgish bakery specialty called Baamkuch will available for purchase. The Bammkuch is supposedly 100m long (more than 300ft) and may break a record, according to the current news website, the Luxemburg Wort.

PDF describes the disease as, “a chronic and progressive movement disorder, meaning that symptoms continue and worsen over time.”

The cause of the disease is unknown at this time. While there is no cure, there are ways to manage its symptoms, including medication and surgery, according to the PDF. 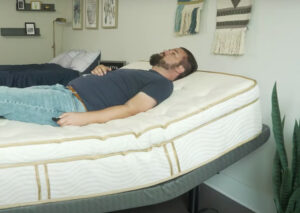