Home » Blog » The Relationship Between Popular Diets And Sleep

We know good nutrition is crucial to good health. It helps you maintain a healthy weight, reduces you risk of chronic diseases like heart disease and cancer, and promotes overall wellbeing. But did you know that nutrition also plays an important role in the quality of your sleep?

How Are Nutrition And Sleep Connected?

Researchers have known for years how insufficient sleep impacts our nutrition. Studies have shown that people who have insufficient sleep consume more calories, have poor dietary habits, and are more apt to be obese. We also know certain things we consume can affect our sleep. For example, caffeinated drinks can keep us from falling asleep; alcohol can put us to sleep but wake us during the night.

When we eat also plays a role in how we metabolize food. Our diets and food choices help regulate our circadian rhythm, the 24-hour internal clock that governs our sleep and wake patterns. Shifting eating patterns, altering our diets, or eating more or less than usual can tinker with the circadian clock, resulting in poor sleep patterns.

But what about specific diets? Does limiting fats, carbohydrates, sugars, and other nutrients impact our sleep differently? Research suggests it does. For example, a study published in the journal Advanced Nutrition, found that people who ate less fiber with more saturated fat and more sugar throughout the day were more likely to have lighter, less restorative sleep, with more awakenings during the night.

Sleep is like a big, nutritious meal for the brain. If we deprive our brains of good sleep, our minds and bodies suffer. One way is through our hormones. There are two hunger hormones that have been found to be related to sleep, Leptin and Ghrelin.

Reduced leptin and elevated ghrelin from chronic insufficient sleep has been associated with an increase in body mass index (BMI). Insufficient sleep has also been linked to increased levels of stress hormones, like cortisol, and resistance to insulin, both of which can lead to weight gain and type 2 diabetes.

Insufficient sleep also impedes weight loss and derail diets. According to a study published in the Annals of Internal Medicine, when dieters cut back on their sleep over a two-week period, the amount of weight they lost from fat decreased 55% despite their caloric intake staying the same. They also reported feeling hungrier and less satisfied after meals, and having less energy.

A diet might be just what you need to kickstart your journey to good health as well as a good night’s sleep. There are plenty of diets to choose from. Let’s take a look some of the more popular diets and how they impact our quality of sleep.

Intermittent fasting, also called intermittent energy restriction, is a diet based on a meal timing schedule that cycles between voluntary fasting and non-fasting over a period of time. One of the most popular forms is the 16/8 method. This variation involves skipping breakfast and restricting your eating period to only eight hours followed by a 16-hour fasting period.

How does it work to improve your health? Well, all food causes an increase in insulin levels. Even when you eat healthy foods you your insulin still rises, just not as much as when you eat unhealthy foods. By fasting, the body is able to sustain very low levels of insulin for a longer period of time. This improves insulin sensitivity, something that diabetics lack. During fasting, the body also repairs and restores itself at a cellular level, and burns stored fat for energy.

Establishing a consistent eating routine, which is at the core of intermittent fasting, can strengthen your circadian rhythm, the internal 24-hour clock that triggers sleepiness at night and wakefulness in the morning.

There are few studies that investigate how intermittent fasting impacts sleep. For example, a pilot study, published in the Annals of Nutrition and Metabolism, found that a small group of participants who fasted over the course of a week didn’t show an increase in REM sleep, but did experience fewer disruptive periodic leg movements and fewer sleep disruptions in general during the night.

Tips for Getting Better Sleep while Intermittent Fasting

The idea behind the Keto diet (short for Ketogenic diet) has been around since at least 500 BC to treat epilepsy, diabetes, and other conditions. It’s essentially a high-fat, moderate-protein, low-carbohydrate diet that forces the body to burn fat rather than carbs. This puts the body into a metabolic state called ketosis. When ketosis occurs, the liver metabolizes fat into ketones, which can be used to supply energy for the brain. Ketosis also reduces blood sugar and insulin levels, which has numerous other health benefits.

Beginning in the 1970s, the Keto diet grew in popularity, this time for weight loss, thanks in large part to the fascination in low-carb diets prompted by the ultra-low carb Atkins diet. The ketogenic diet generally consists of 70%-80% fat from total daily calories, 5-10% carbohydrates, and 10-20% protein.

A study from the Medical University of South Carolina suggests that following a Keto diet can help you sleep butter. But, experiencing the benefit of better sleep can take a while. The study followed six morbidly obese teenagers on a very-low calorie Keto diet over the course of four months. At first, the teens showed reduced REM, or dream sleep, and excessive slow-wave, or deep sleep. But toward the end of the study, researchers found the reverse to be true. One theory is that the ketogenic diet stimulates a brain chemical called adenosine, which regulates sleep, relaxes the nervous system, and helps reduce pain.

There’s even a diet side effect known as “Keto insomnia,” where Keto-followers are so pumped with energy at bedtime, they just can’t fall asleep. This, too, is believed to be temporary as the body begins to adjust to the diet. But it is still bothersome.

Tips for Getting Better Sleep on the Keto Diet

The Paleo diet encourages eating foods like lean meats, fish, vegetables, nuts, and seeds, and limits options like dairy products, legumes, and grains — foods that only became common when farming emerged about 10,000 years ago.Also known as the Caveman Diet or the Stone-Age Diet, the Paleo diet doesn’t emphasize calorie counting or portion sizes, and some plans allow for occasional “cheat” meals from time to time.

Typically, a Paleo diet allows for 30% calories from protein, 40% from lean fats, and 30% percent from carbohydrates. Studies on hunter-gatherer-based diets have found they have greater short-term benefits compared to diets based on national nutritional guidelines, such as greater weight loss, decreased blood pressure, increased insulin sensitivity, and improved cholesterol.

Since following the lead of our Paleolithic ancestors’ eating habits has benefits, some have suggested that there is much to be gained if we slept like them as well. For example, getting plenty of exercise during the day and sleeping in a quiet, dark environment. Of course, you’ll probably want to stick with your comfy mattress rather than sleeping on the floor, like cavemen did.

But some studies so suggest that people who follow a hunter-gatherer diet sleep better. For example, the Paleo diet allows for a larger percentage of calories to come from protein. In terms of sleep, that could be a good thing. Higher protein diets are associated with longer sleep times, more consistent sleep patterns, and higher quality of sleep. Furthermore, case study, published in the Journal of Chiropractic Medicine, found that following a Paleo diet for three months resulted in weight loss, better sleep, and improvement in obstructive sleep apnea episodes.

On the flip side, a small Australian study followed 39 healthy women over four weeks, half of whom followed the Paleo diet, and the other half followed national nutrition guidelines. After the study period, more of the women in the Paleo group reported being tired and having trouble sleeping.

Exchanging protein for carbohydrates may be to blame for sleep difficulties when starting low-calories, high-protein diets like Paleo. Carbohydrates increase tryptophan which can make us sleepy. Protein can trigger an increase of tyrosine, an amino acid that triggers chemicals like epinephrine and norepinephrine, which are stimulating and can interfere with falling asleep and staying asleep.

Tips for Getting Better Sleep on the Paleo Diet 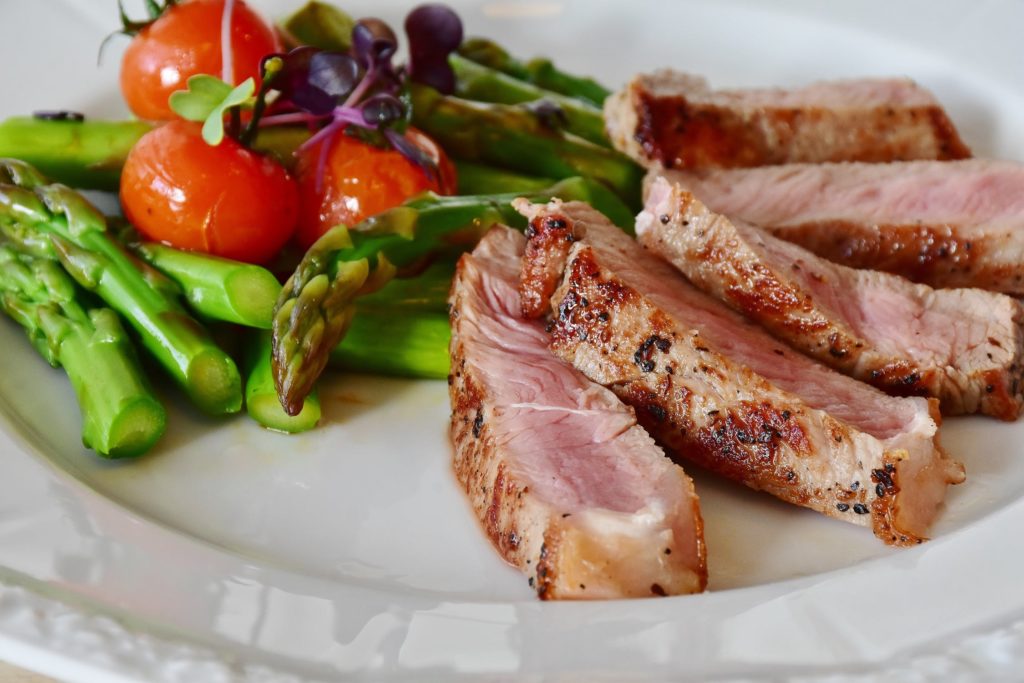 The Whole30 diet was created in 2009 by fitness and nutrition consultant Melissa Hartwig and her ex-husband Dallas. In 2015, the couple published “The Whole30” book outlining the wisdom behind their ultra-restrictive 30-day diet. The book has since sold more than a million copies and Melissa Hartwig has since spun it off into a wide variety of money-making business partnerships.

Whole30 is a 30-day elimination diet designed to “reset” your eating habits. The diet is similar to the Paleo diet in that it cuts out grains. But Whole30 is far more restrictive, completely eliminating sugar (including natural sugars like honey and maple syrup), alcohol, legumes, soy, and dairy. Instead, this diet calls for eating “clean” whole foods like meats, seafood, vegetables, and eggs.

According to Hartwig, one of the benefits of the Whole30 diet is improved sleep. Followers report falling asleep faster, sleeping more deeply, and waking more easily. However, you’d be hard pressed to find published studies in peer-reviewed journals that prove or disprove that. In fact, there is little information beyond personal blogs that shows how the Whole30 diet affects sleep. Hartwig does admit that any diet change can disrupt sleep, at least at first while your body is adjusting. Thus, Whole30 sells “sleep remedy” supplements.

As with any diet that suddenly cuts out gluten and refined carbs, you’ll likely feel fatigued and achy as your body learns to manage without those things. This can make sleeping difficult. Once your body gets adjusted, though, your energy returns and sleep improve.

Tips for Getting Better Sleep on the Whole30 Diet

If you’re on a diet in the first place, you’re likely wanting to shed a few pounds. Perhaps it is to improve your health and your sleep. Studies show that many people who are overweight or obese also suffer from some type of sleep problem including overheating, acid reflux, restless leg syndrome, sleep disorders, and general discomfort. Research also suggests that sleep problems may contribute to weight gain by increasing appetite and impairing glucose metabolism.

Unfortunately, your body will have to adjust to the change in your eating habits, just as your mind will. And that can mean your sleep might suffer at first. But don’t lose hope. Diet-related sleep disturbances are often short-lived. And, as time goes on and you lose more weight, your sleep is sure to improve as well.