A number of people have inquired about mattresses that use plant-based ingredients in their foam.  I have some experience with this, and I thought I’d put together a few thoughts on what I know to be true about these mattresses and what people should consider if they are thinking of getting one.

What Is Plant Based Memory Foam?

Instead of using only petroleum-based chemicals to manufacture memory foam, plant based memory foam uses a portion of plant-based ingredients, typically soy.  This type of foam was initially created to address some of the concerns typically associated with traditional memory foam, such as chemical off-gassing and a slow response time of the foam.

A major thing to note if people are looking into getting a mattress with plant-based memory foam, they can expect that the mattress they are looking at only uses a portion of plant-based ingredients and is not 100% plant-based.  That means if they are thinking they are getting a 100% green product, they should know that they aren’t.

The typical percentage I’ve seen is 30% plant based and 70% petroleum based.  Just know that the percentage most likely isn’t going to be 100% and consider asking the company what the exact percentage is.

Related: What Is The Best Memory Foam Mattress? 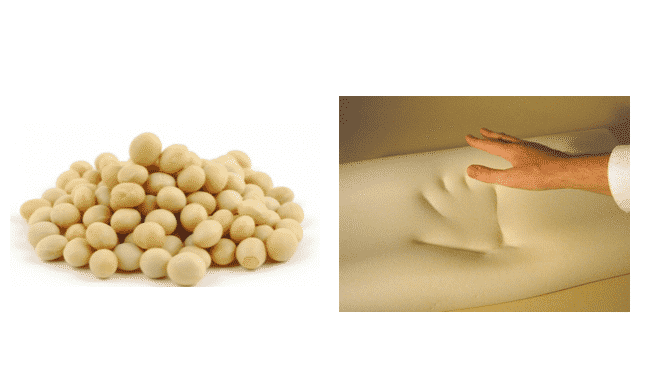 Is It More Green?

Consumers will see claims that using plant based memory foam is more “green” than traditional memory foam.  While I’m not an expert on the topic, from the research I’ve done I don’t think that the difference is very substantial, especially when people consider that the foam is only a portion plant based.  If people want to really go “green,” then they might want to take a look at all natural latex mattresses.

What Is True About Plant Based Memory Foam?

While there aren’t a ton of products yet out there in the market, there are some things that we do know to be true regarding plant based foam mattresses.

Up to this point, I have only reviewed two mattresses that use this type of foam.  Check out Loom and Leaf or Amerisleep for two companies that use plant-based foams.

Should People Buy One Of These Mattresses?

The answer really depends.  If people are really sensitive to heat when sleeping or they don’t like getting stuck in their mattress, then there may be a good case to get one of these mattresses.  People definitely need to consider all the other factors of what goes into a great mattress before pulling the trigger, but there are some great plant-based foam mattresses out there.