As one studies Greek mythology, they may learn about Hypnos, who was the god of sleep. Hypnos is generally considered to be a benevolent god who helped mortals sleep. Of course, tucked into bed on a comfortable mattress, with soft blankets and fluffy pillows, sleep likely comes pretty easily. But if someone needs help easing into slumber, a few stories from Greek mythology might be just the thing to bring sweet dreams. 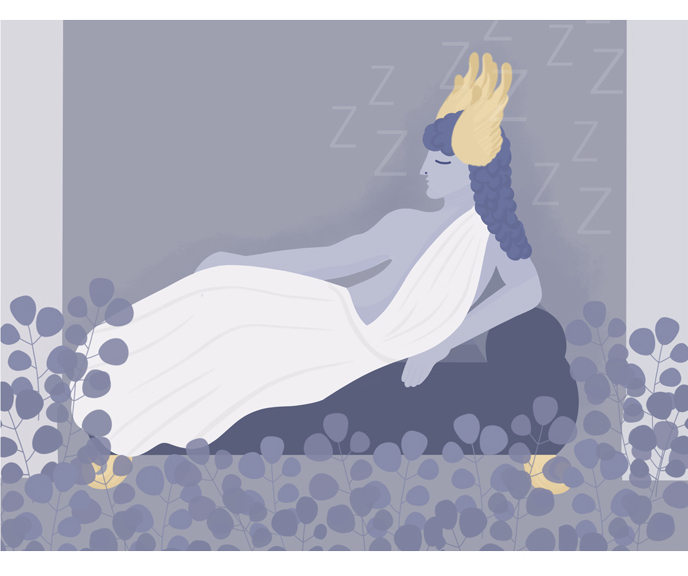 Hypnos is usually depicted as living in the underworld in a big cave. The river Lethe originated in this cave, and it’s also the place where day and night met. Hypnos’s bed was made out of ebony, and hypnotic plants grew plentifully at the entrance to the cave. The cave was devoid of light and sound as well.

According to TheOi Project, Hypnos lived in Erebos, which was the land of eternal darkness. He’s often depicted as a young man, with wings on his shoulders or brows. He is said to follow his mother, Nyx, the goddess of night, up into the sky after the sun has set.

Hypnos visited people to help ease them into a state of rest, and he hid from the sun during the day, writes Encyclopedia.com. Greek mythology depicts Hypnos as gentle and benevolent, bringing restorative sleep to mortals.

Here are some more resources for those who are interested in learning more about who Hypnos was:

The Family Lineage of Hypnos

As we mentioned, Hypnos is the son of Nyx (the goddess of night). He also had a twin brother, Thanatos. They were believed to have lived next to each other in the underworld. The son of Nyx and Erebus, Hypnos was part of a family associated with night and darkness. Hypnos was married to Pasithea, the result of a promised marriage by Hera, wife of Zeus. Pasithea was the deity associated with relaxation and hallucinations.

The site New Forest Centre says that Hypnos lived in a cave that had poppies and other types of hypnotic plants at its entrance, and it did not have a door, so Hypnos wouldn’t be disturbed by the noise of hinges.

One of the best-known myths featuring Hypnos involves Zeus and Hera. In this story, Hera wanted to trick Zeus, so she went to Hypnos for help in putting Zeus to sleep. Hypnos wasn’t sure he wanted to help, but Hera promised that he could marry Pasithea if he participated in her plan. Hypnos wanted to marry Pasithea, so he put Zeus to sleep. While Zeus was sleeping, Hypnos called on Poseidon to intervene in an ongoing war. As a result, Hera’s side won the war, and Zeus never found out that Hypnos had put him to sleep.

In an article from the journal Sleep Health, Dr. Meir H. Kryger writes, “The inner world of sleep was extremely important to the ancient Greeks. They valued sleep for its apparent escape from the problems of the living world, as well as for its prophetic value, drawn from dreams.”

Kryger says the Subconscious experiences have always been crucial to the Greeks’ understanding of the waking world. There were various gods associated with sleep.

“Hippocrates and his disciples wrote extensively on the altered state of the sleeping individual,” Kryger writes. “They defined sleep not as a miniature death but instead as a whole separate state of existence: “For the body when asleep has no perception; but the soul when awake-has cognizance of all things—sees what is visible, hears what is audible, walks, touches, feels pain, ponders.”

We can’t help but wonder, what would happen if Hypnos went to visit a person who was struggling to sleep because of a bad mattress or a stiff neck? Would he be able to suggest a new bed or a better pillow for the person’s sleeping position? We can only guess!

See our suggestions for Best Mattresses!