Home » Blog » 20 Natural Insomnia Cures (And the Science Behind Them)

If you have trouble sleeping at night, you’re not alone. Roughly 60 million Americans suffer from insomnia each year.

If you fall into this camp, never fear. We’ve put together a guide featuring 20 natural insomnia cures. With any luck, some of these options will offer the aid you need to enjoy better sleep.

Simply put, insomnia happens when you have trouble going to sleep or staying asleep. You may also wake up early and have a difficult time going back to sleep after waking up in the middle of the night.

The Mayo Clinic lists the following as other common symptoms of insomnia:

There are two basic types of insomnia: acute and chronic. Acute insomnia occurs when you have a hard time sleeping for three nights a week for a duration of anywhere from two weeks up to three months. If you are having these issues for more than three months, then you enter chronic insomnia territory. 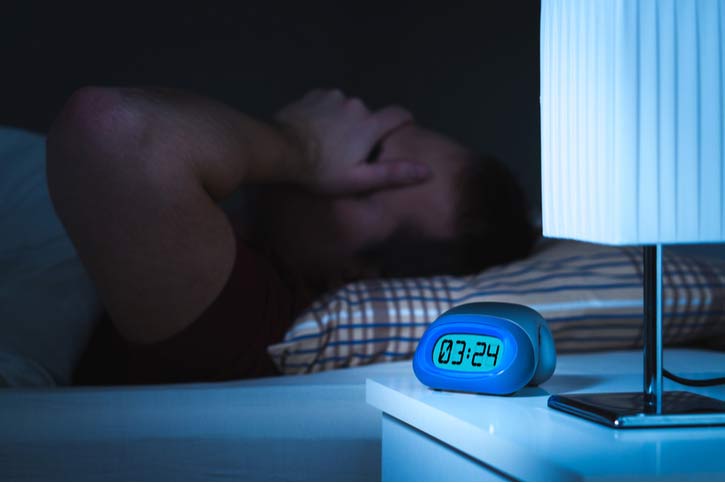 While 60 million Americans deal with insomnia yearly, they’re not all experiencing the same type of insomnia. A new study at the University of Pennsylvania School of Medicine discovered that, out of a cohort of insomniacs, around 75 percent recovered within 12 months and had no further issues. Twenty-one percent reported occasional bouts of insomnia, and six percent dealt with continuing chronic insomnia.

Thus, the national rate of insomnia may vary a bit depending on whether you’re talking about acute or chronic insomnia.

There are many reasons you might not be sleeping. It’s possible these factors might be very specific to an individual’s situation, but in many cases, insomnia is brought on by one or several common causes. Here are some of the most common reasons why people develop insomnia.

Stress can come in many forms, and they can all lead to insomnia (both acute and chronic). Traumatic events, such as a death in the family, can disturb your sleep. Or worries about finances, family, and work could keep you up at night.

Work stress, in particular, is a major culprit when it comes to poor sleep.

Accountemps, a global staffing firm, surveyed 2,800 American workers about work and sleep quality. Out of this group, 44 percent said they lost out on sleep because they were thinking about work. This group cited trouble with their boss or coworkers and worry about job security as their main stressors.

Meanwhile, a recent study at the University of Iowa found that being a bad coworker could also be a cause for insomnia. In a release, lead researcher Zhenyu Yuan said, “After people engage in bad workplace behaviors, they come to realize such bad deeds threaten their positive moral self-image, which creates stress. As a result, they may keep ruminating over their stress from work, and thus have trouble falling and staying asleep at night.”

While there are some lucky people who can sleep anytime and in any place, most of us deal with acute insomnia when we travel. This is most likely because we tend to have difficulty sleeping in a new place.

A 2017 study from Brown University found that we are more alert during our first night in a new location. Researchers observed that subjects reacted to random sounds more during the first night and less during the second night. If you travel a lot, you could be waking up more as your body is not yet used to the new environment. 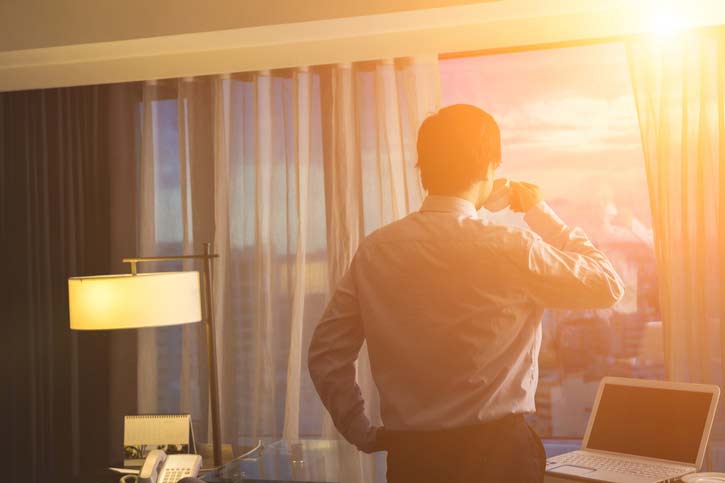 Irregular work schedules also affect our circadian rhythms and can lead to insomnia. Shift workers, such as nurses and doctors, are particularly susceptible as they move from day to night shifts constantly.

Some people have irregular sleep schedules because of work and other commitments. Others can sleep and wake when they like, and end up setting an unhealthy schedule in the meantime.

This is a major issue in teens, who can be known to stay up late and sleep in late. A recent study at the University of Hong Kong found that, out of a group of night owl teens, 23 percent reported struggling with insomnia. Only 18 percent of a group of morning-types reported any issues with insomnia.

This is more of a recent phenomenon, but it can be common practice to use technology such as cell phones and tablets right before bed. This can have adverse effects on sleep quality. 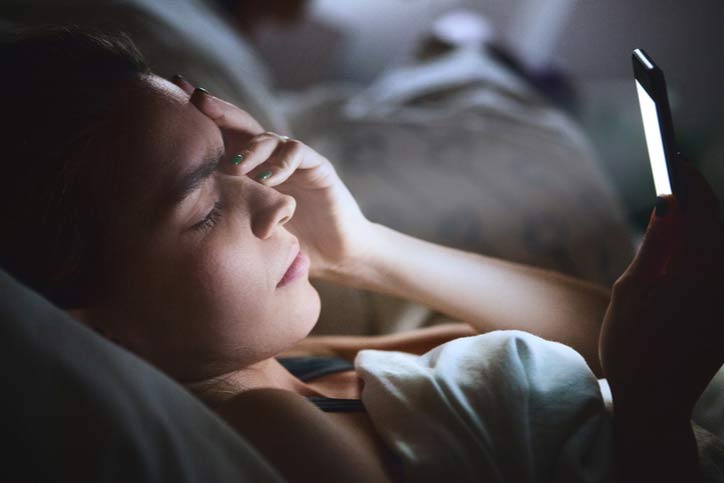 The main reason cell phones, laptops, and tablets affect sleep is due to the blue light they emit. This light has been shown to interfere with our circadian rhythm.

During a recent study, which was published in the journal Physiological Reports, researchers compared the quality of sleep in subjects on nights where they used light-emitting technology and nights without. On nights when they were able to use their tablets and phones, the subjects went to bed 30 minutes later on average, fell asleep later, and said they felt more awake before bed and more tired after waking.

Their melatonin levels were also suppressed, and the secretion of melatonin was delayed. Melatonin is a hormone that is produced by our pineal gland. It helps regulate our sleep-wake cycle.

The authors of the study explained: “In the evening hours around bedtime, light exposure suppresses melatonin secretion and causes a phase delay shift in circadian rhythm timing such that melatonin secretion is reset to begin at a later time on subsequent nights.”

It’s no secret that too much coffee (or caffeine in other forms) can keep you up at night.

How does this happen? First, the caffeine in coffee tricks your body into thinking you are not tired by affecting receptors in your nervous system.

Also, coffee is a diuretic, which means it increases your need to urinate. This can wake you up over the course of the night.

While coffee works quickly and can have immediate effects on sleep quality, there are also potential long-term impacts that coffee can have on our sleep quality. Researchers at Seoul University in South Korea discovered that a lifetime of coffee drinking could shrink our pineal gland, limiting the amount of melatonin it can secrete. This, in turn, could increase our chances of developing insomnia in our golden years. 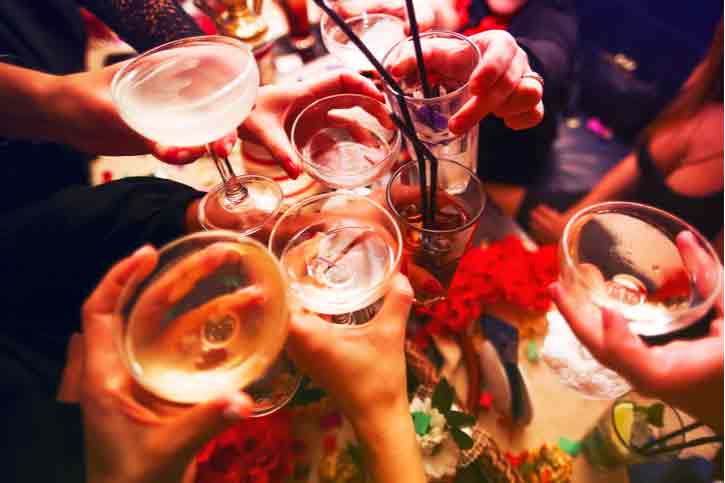 Alcohol, on the other hand, can be tricky. We have a glass of wine before bed and believe it helps us sleep. And it’s true that alcohol might help us drift off to sleep. However, like coffee, alcohol can actually increase our chances of insomnia throughout the night.

That’s true for several reasons. For starters, alcohol is also a diuretic, so it can cause you to wake up during the night in order to head to the bathroom.

In addition, as a 2010 study at Taipei Medical University found that alcohol can affect our circadian rhythm and interfere with our sleep-wake cycle. While it may feel like alcohol puts you to sleep, it can actually increase your chances of waking up throughout the night and experiencing insomnia.

In fact, one 2018 study from the journal JMIR Mental Health found that even one alcoholic drink could interfere with your ability enjoy high-quality sleep. Meanwhile, another 2018 study from the Journal of Neurochemistry found that just one night of binge drinking could impair sleep quality for up to two days afterward.

The Negative Effects Of Insomnia

Besides the exhaustion, there are some more serious issues that can arise when you are dealing with insomnia.

Dangers On The Job

As noted above, one of the symptoms of insomnia is an increased risk of accidents or difficulty focusing on the job.

If you sit at a desk, you may send an email with bad grammar. If you work with heavy machinery or operate on patients, the effects of sleep deprivation can be much more catastrophic.

A recent study looked at the effects of sleep deprivation among medical professionals. The researchers followed 33 new medical residents for eight months. The study, which was published in the Journal of General Internal Medicine, compared the two months before residency with the first six months of residency. On average, the residents lost 2 hours and 48 minutes of sleep each week and reported worse moods.

Insomnia can cause drowsiness, and drowsy drivers can be dangerous on the road.

One 2018 study from the journal SLEEP reported that drivers who slept for less than seven hours a night were significantly more likely to cause an auto accident.

Additionally, a report by the AAA Foundation For Traffic Safety found that 9.5 percent of all crashes are caused by a drowsy driver. 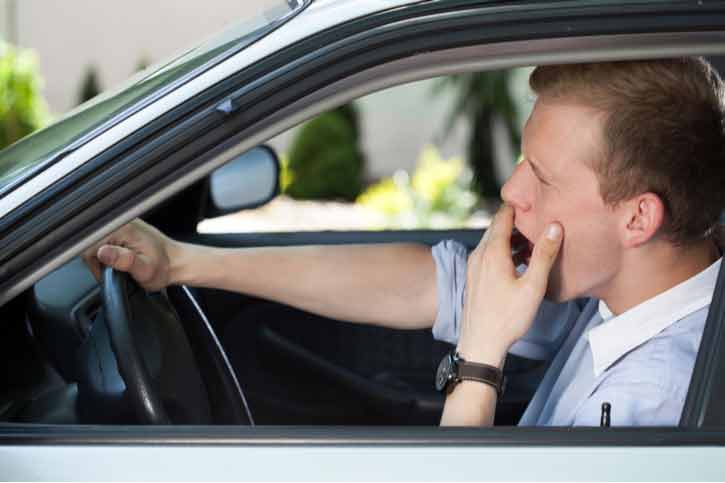 Insomnia has also been linked to major health issues.

For instance, according to the Anxiety and Depression Association of America, “Insomnia is associated with reduced quality of life as well as depression. In turn, depression can lead to sleep problems. Insomnia can also lead to feelings of anxiety, frustration, hopelessness, exhaustion, and an inability to concentrate.”

Besides these mental ailments, insomnia and sleep deprivation have also been linked to a range of serious health conditions including high cholesterol, breast cancer, and Alzheimer’s.

On the other hand, one 2018 study, which was conducted by the National Institute on Alcohol Abuse and Alcoholism, found a possible link between healthy sleep and a decreased chance of Alzheimer’s. During sleep, our system flushes out beta-amyloids, a plaque that has been associated with the disease. The researchers concluded insomnia and poor sleep could increase the risk of developing Alzheimer’s.

Insomnia can be a frustrating condition that results in fatigue (at best) or more severe mental and physical conditions (at worst). While the 20 natural remedies outlined here may improve your odds of enjoying quality sleep, it’s important to consult a medical professional if you’re struggling with persistent insomnia. They’ll be able to support you in developing the habits and tools you need to enjoy sound sleep on a regular basis.

If you struggle with insomnia, finding the right mattress and bedding can go a long way in helping you with your condition. Take a look at some of our top picks for mattresses and other sleep products.