Researchers from the Centers for Disease Control and Prevention (CDC) say “unsafe sleep practices” with infants — such as sleeping in an adult bed and with soft objects like blankets — increases their risk of death from suffocation.

The complete findings were released in a study published in the journal Pediatrics last month.

According to the CDC, the leading cause of injury death among infants less than one year old is accidental suffocation, with 82% of those deaths attributed to unintentional suffocation or strangulation in bed.

Study authors say this type of suffocation results from hazards in an unsafe sleep environment and are preventable.

“Understanding the circumstances surrounding these deaths may inform prevention strategies,” said the study. 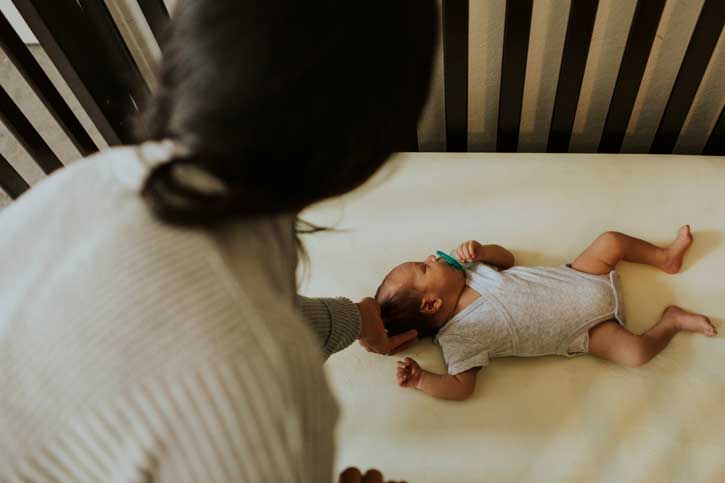 Using data from the 2011 – 2014 Sudden Unexpected Infant Death (SUID) Case Registry — a program monitored by the CDC — experts found that 14% of sudden unexpected infant deaths could be classified as “explained suffocation with unsafe sleep factors.”

In order to meet this classification, the cases had to meet several specific criteria:

Then, each case was categorized by its “mechanism of obstruction”:

Of the 14% of SUID deaths in the registry, 69% were a result of the use of soft bedding, 19% were from adult or sibling overlay, and 12% were attributed to wedging.

Specifically, soft bedding deaths were more likely to occur in an adult bed, with the baby on his/her stomach (as opposed to his/her back) and with a blanket blocking the child’s airway, according to the study results.

The American Academy of Pediatrics (AAP) recommends room sharing with your infant, but only bringing them to the bed to feed or comfort them.

“A crib, bassinet, portable crib, or play yard that meets the safety standards of the Consumer Product Safety Commission (CPSC) is recommended along with a tight-fitting, firm mattress and fitted sheet designed for that particular product,” the AAP says.

Guidelines aside, bed-sharing or co-sleeping with infants is still a common sleep practice across the country, say experts.

“In my professional experience, the reason most new moms explain to me their choice to bed-share with a newborn is because they are going to be up several times a night feeding the baby and to them it feels like the most logical and safe choice,” Courtney Zentz, a pediatric sleep expert and owner of Tiny Transitions in Philadelphia, told Mattress Clarity.

Zentz told us that through the first few months of development, an infant shapes their own sleep skills and habits. When parents who co-sleep are ready for them to move to the crib, many babies are unfamiliar with the new space and many parents don’t know what else to do to correct this. As a result, the bed-sharing continues in those cases out of exhaustion and overwhelm.

Most parents are very receptive to safe sleep teaching, Jonathen Bartholomew, a Doctor of Osteopathic Medicine at Utah Valley Pediatrics, told Mattress Clarity. “But since fatigue is the most common reasons parents choose to co-sleep, it’s easy to see why parents don’t always follow the recommendations of the AAP and their pediatrician.”

Dr. Charles I. Shubin, a board-certified pediatrician with Mercy Family Care Physicians in Baltimore, told Mattress Clarity that the best safe sleep advice he gives parents is the “A-B-C-D” talk. He says it stands for:

Safe sleep practices and guidelines for infants are continuing to evolve. In April, Fisher-Price and its parent company, Mattel, voluntarily recalled 4.7 million Rock ‘n Play Sleepers, which were linked to more than 30 infant deaths since 2009. The popular infant sleeper was marketed as an “inclined sleeper designed for all-night sleep.” This incident represented just one of many controversies surrounding the proper way to approach infant sleep.